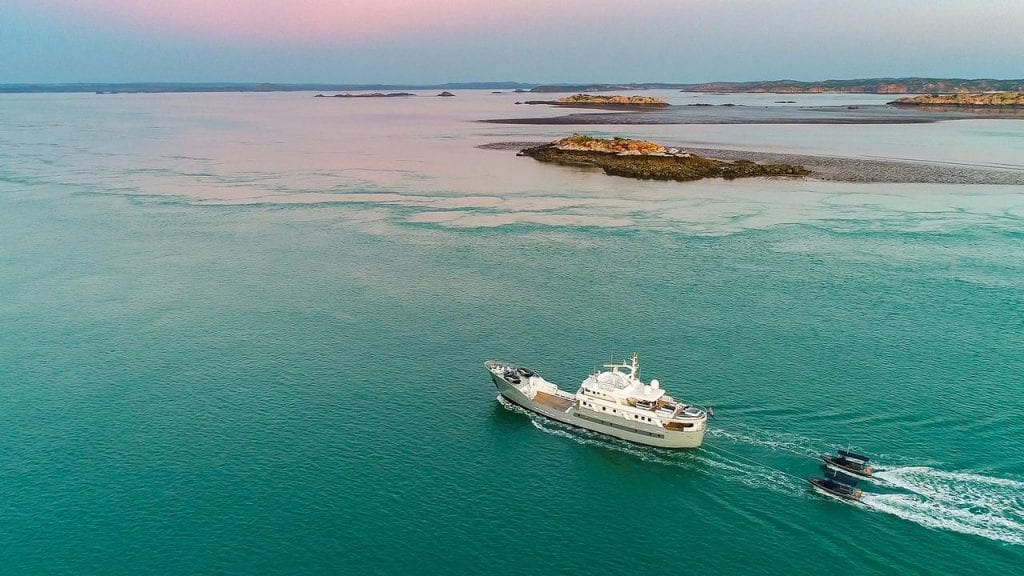 “It’s the character of the boat that lends itself to the region.”

One of the last frontiers for adventure, the Kimberley offers natural drama worthy of a standing ovation. Sophia Wilson explores Australia’s wildest coastline on board the equally hardy 42 metre ANDA.

The tender is hurtling towards a narrow gap between two plunging cliffs, the force of the rushing water causing the tender to squirm underneath us. “Hold on,” says Captain Alan Martlew. Gripping tightly with my left hand, I force myself to keep my eyes open as we surge through the opening into a chamber on the other side. We are greeted by another set of foaming rapids and a wall of water powering through an even narrower opening, the sheer force of which is both terrifying and exhilarating. Tidal force wins this battle, with the tender powerless to do more than swirl in the dancing whirlpools of this natural phenomenon known as the Horizontal Falls. “Nature provides the show in the Kimberley,” says our guide, Grant Streeter. He isn’t wrong. 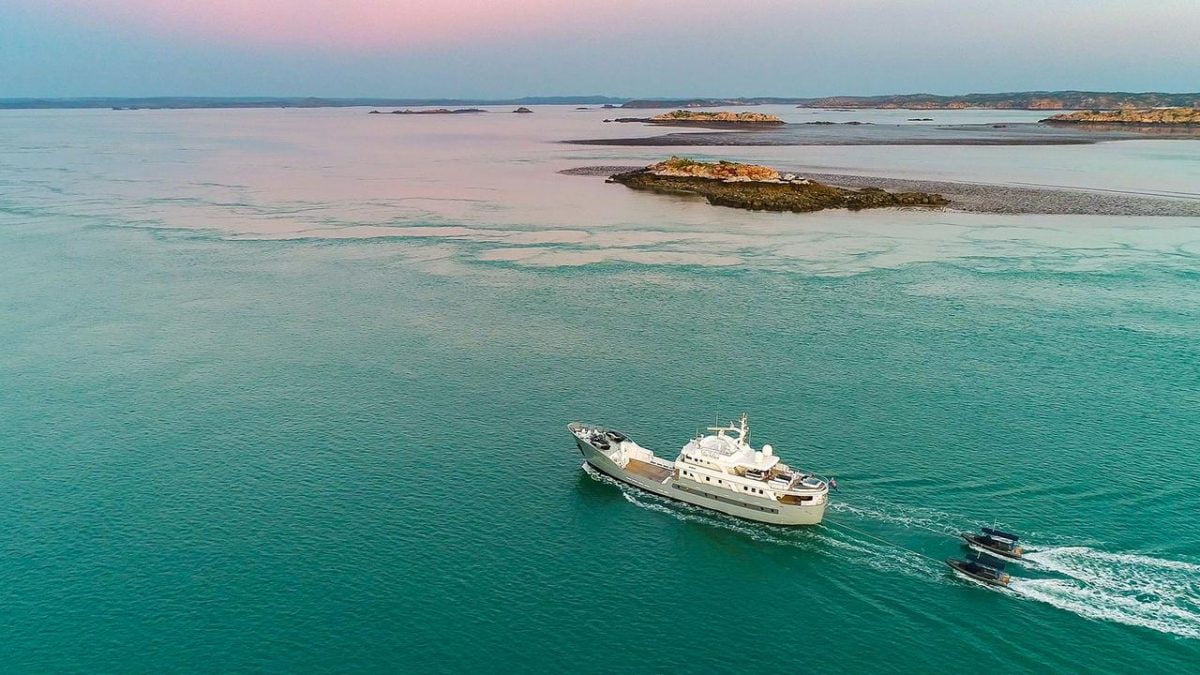 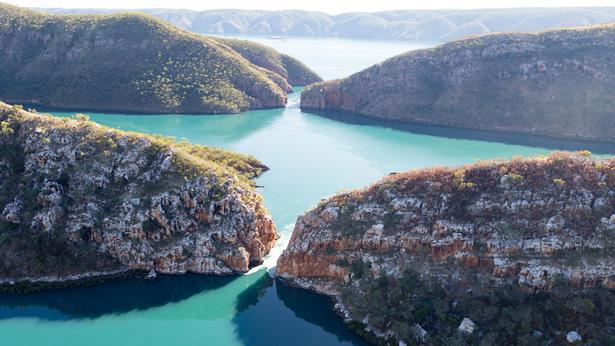 This is our first encounter with the incredible tidal ranges that define Australia’s northwest coastline. There can be a 10 metre change on a single tide, creating rare spectacles – from the Horizontal Falls to living reefs that protrude temporarily from the sea. As well as incredible tidal phenomena, the Kimberley, which is three times the size of England but has an estimated permanent population of less than 35,000, offers true adventure cruising, with the ability to spend days exploring its bewitching coastline without spotting another human. While discovering Australia’s wild side, we are treated to fascinating displays of wildlife, from five metre saltwater crocodiles lazily basking in the sun to stocky yet reportedly friendly lemon sharks circling in search of scraps. This is complemented by awe inspiring landscapes of plunging gorges, swirling rivers and more than 2,500 uninhabited islands strung along a 6,500 nautical mile coastline.

The Kimberley’s minimal infrastructure, large areas of uncharted waters and vast size mean that it requires a vessel with an adventurous outlook – such as 49 metre Glaze, which scooped this year’s Voyager prize at the World Superyacht Awards for her Kimberley trip from Wyndham to Broome. I am fortunate enough to be on board another serious explorer, 42 metre ANDA. Built in 1965, she started life as a buoy tender for the Norwegian Coast Guard. 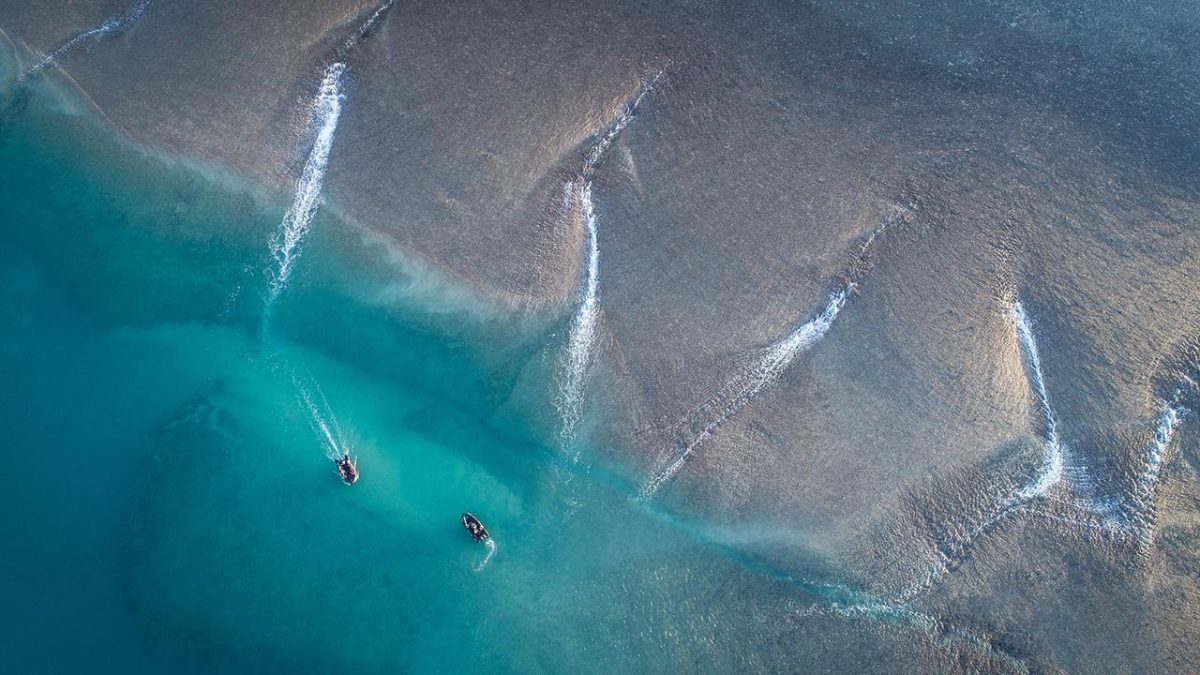 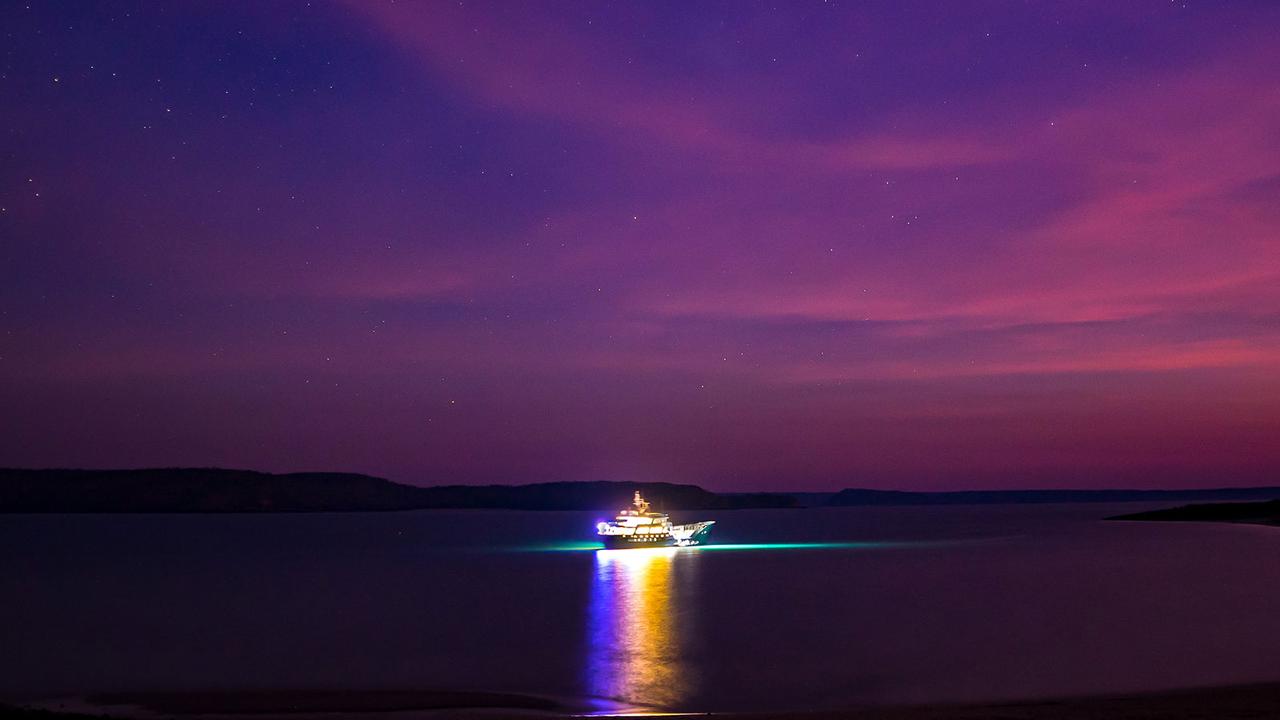 ANDA at anchor beneath the extraordinary star-pricked sky.

In 2010 she underwent a two year rebuild to turn her into a luxury vessel, accommodating 10 guests in five bright cabins. While ANDA now fulfils modern superyacht expectations, and her wraparound bar and spa pool on the sundeck are the perfect spots for taking in golden orange and crimson sunsets, she is still well equipped for exploration voyages with a 10,000 nautical mile range.

However, her captain believes it is her feel that really adds to the experience. “Of course, she has big deck spaces to be able to put the tenders on and the separate crew area is very important,” he says. “But it’s the character of the boat that lends itself to the region. You are exploring somewhere you have never been before and to be on a vessel like this makes you feel like a true explorer.”

We certainly feel like true explorers the next morning when we awake to find ANDA gently manoeuvring her way up a channel into Montgomery Reef. Another of the Kimberley’s tidal phenomena, the reef, which covers more than 220 square miles, appears to gradually emerge from the ocean as the water recedes. We head off in ANDA‘s two black high speed diesel jet tenders to explore the reef and its surrounding waters, which are teeming with green turtles. The coral is thought to be some of the most resistant in the world and has developed unique mechanisms to cope with the intense sun exposure during low tide.

My tender battles against the whirlpools and rapids but eventually, despite its powerful engines, we can’t make it any further – once again nature proves it is king in the Kimberley. We make our way back to the anchored ANDA, the tenders bobbing and turtles poking up their heads like periscopes.

Perhaps the only frustration of exploring this amazing environment is that swimming in most places is not advisable. The Kimberley’s cerulean waters are so flat you can’t help but imagine cutting a wake on a monoski but, having had various glimpses of what lies under the surface, I am more than happy to swim only when it’s deemed safe to do so. 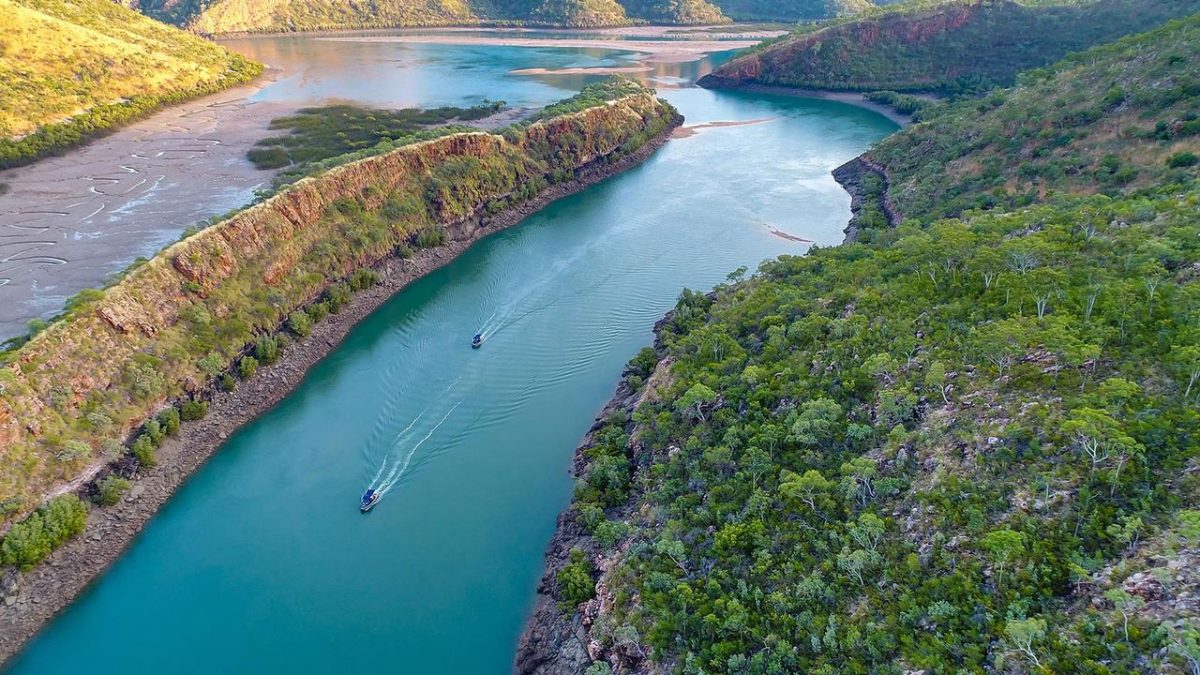 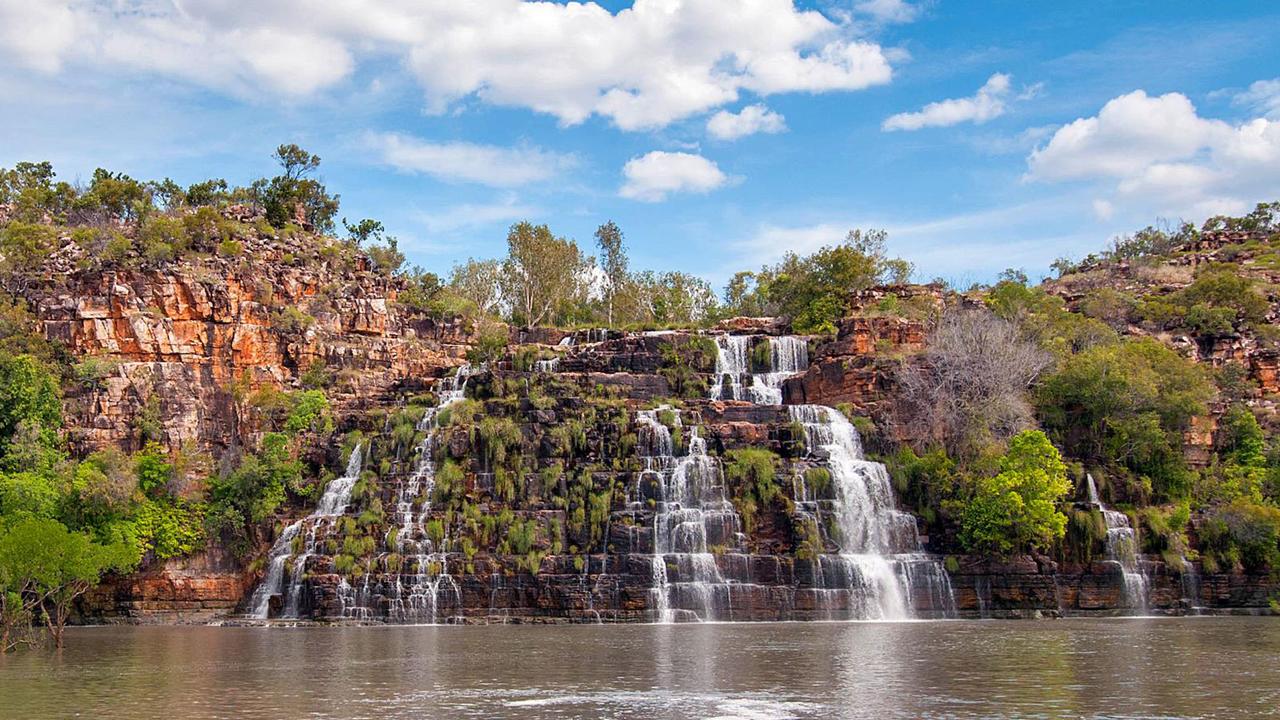 The Cascade Falls on the Prince Regent River.

One of our most spectacular dips comes more than 200 miles into our trip on the mighty Prince Regent River. After heading out on the tenders 20 miles up the river, for a picnic lunch alongside the rock pools of Camp Creek, we continue on to the spectacular King’s Cascade. The 25 metre terraced falls are draped in emerald grasses but, despite their beauty, they are infamous as the site where American actress Ginger Meadows was killed by a crocodile in 1987.

After being splashed under the Cascade’s flow, the tenders pull to the side and we scramble and climb our way to the top of the falls, where we are greeted by a fresh dark marble pool (which I am assured is crocodile free). The water is unbelievably clean and provides a welcome cooling off from the consistent 30°C temperatures that can be expected during the dry season, which runs from May to October.

Despite the dangers, and the barren nature of the land, the Kimberley has an Aboriginal history dating back at least 40,000 years. Remarkably, the indigenous people found a way to survive and thrive. Their diet was based on using the changing seasons to ensure gaining the highest fat and nutrient content from all resources. During our trip Streeter, who is married to an Aboriginal woman, shares snippets of this lifestyle with us. One example is that when they catch a turtle, they will cut into its neck to see if it has green fat. If it does they will eat it, otherwise it is released until it has reached the correct level of maturity. Today, the Kimberley has one of the largest populations of Aboriginal inhabitants with approximately 160 communities and 30 dialects. 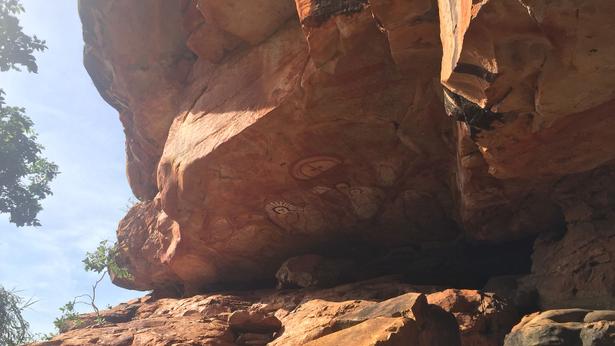 Wandjina rock art in the Kimberley.

An aerial-view-Kimberley An aerial view of the Kimberley.

The region’s strong connection with its Aboriginal past is evident in the hundreds of rock art sites. Streeter has built a close relationship with local art custodian Donny Woolagoodja and has spent the past three decades discovering new sites. He takes us to many during our voyage but perhaps the most impressive is a series of Sash Bradshaw paintings hidden under a ridge perched on the side of St George’s Basin. After scrambling up the side of the gorge and crawling through a narrow stone gap we are rewarded with a series of oxblood paintings that are thought to be more than 35,000 years old.

Back on board, chef Jamie Mullen takes us on a round-the-world culinary tour, from classics such as red snapper with beurre blanc, and Asian spiced pork belly, to Australian delicacies such as peppered red kangaroo steak. A highlight of the trip (for the Brits on board at least) is the perfectly cooked beef wellington to mark fellow guest Nick’s birthday. However, despite the endless stream of hearty cooked breakfasts, light lunches and gourmet dinners emerging from the galley, Mullen admits this cruise is a challenge. “In the Kimberley, where it is such a harsh environment, provisioning really is hard,” he says. “A lot of it depends on how well your vegetables keep. The menu always has to be fluid.”

Fuelled by Mullen’s menus, our once-in-a-lifetime Kimberley adventure has us covering 330 nautical miles and a further 100 in the tenders in just seven days. Ours is a crash course in what is on offer – you could spend double or triple the time covering the same distance. What makes it an exceptional destination to explore is not just the better known sites but the ability to reconnect with nature. While cruising I spend hours gawping at the limestone cliff outcrops, verdant islands and white beaches we pass. Being away from civilisation also enhances my appreciation of natural patterns and rhythms, with days naturally shifting to sunrise awakenings and early nights. One of my daily highlights is watching the moonrise. The stars are spectacular and one of my favourite evenings is by a campfire on a deserted beach, with a cooler full of Australian white wine, beer and fresh oysters harvested in the morning – a true taste of the Kimberley. 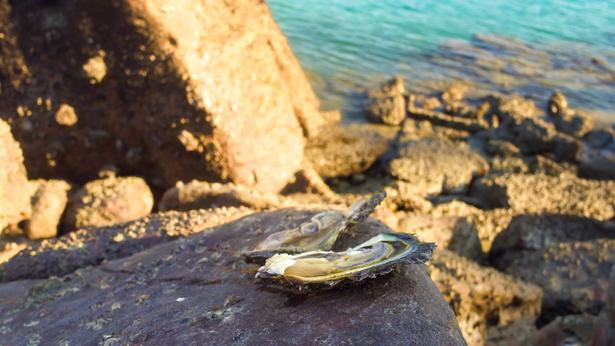 Fresh oysters for supper on the beach. 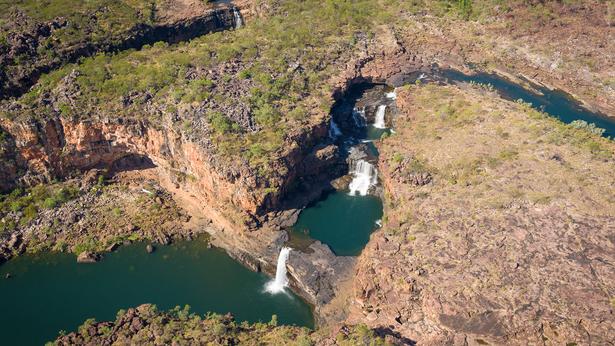 The curtain call of this dramatic adventure is a helicopter ride over the majestic Mitchell Falls – the highest waterfalls in Australia. After a fond farewell to the crew, we tender to a remote beach to pick up our ride. Strapped in, we are whisked upwards to reveal the vibrant blue seas, complex river systems and blood orange landscapes that we’ve been experiencing from sea level. No matter where your seat is in the Kimberley, you won’t be disappointed.

ANDA is available for charter in The Kimberley from May to September from AUD$175,000 per week.  Those interested in chartering M/Y ANDA should contact their preferred broker or her central agents, Ocean Alliance, on the details below.