Captain Michael Gooding of 40m SILENTWORLD, reports on a recent expedition for the Australian Maritime Museum in conjunction with the Silentworld Foundation. The expedition took place over 10 days in January 2017, around the reefs on the East Coast of Australia – precisely, 280 nautical miles from Bundaberg. Cato Reef and Kenn Reef were the main sites, where there has been a number of recordings of wrecks and various previous expeditions by other groups.

The 8 crew on board were amazed by every day’s discovery. 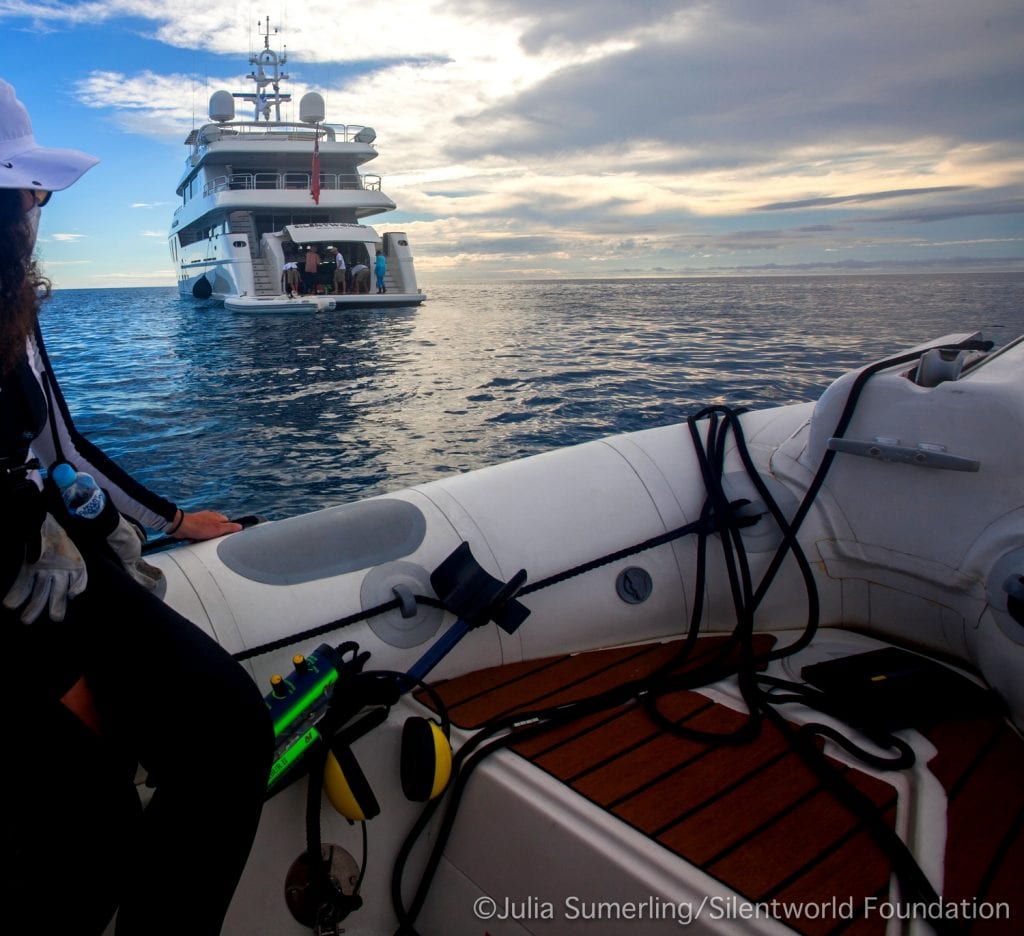 We departed this morning while everyone was asleep. Lines were let go at 03:00 am and we put the tender on the tow in the harbour before venturing out into the channel. We have a purpose built 18 foot catamaran that tows the magnetometer and double as a dive tender. We are travelling at 10 knots with the tender dutifully following us out into the coral sea.

The weather conditions are as expected with 15 – 20 knots and a 2 metre swell. The swell is on the starboard bow and with the assistance of the stabilisers and a steady ship we are travelling well and now off the continental shelf. We passed the continental shelf at about 09:00 this morning and now show 650 metres on the depth sounder.

The members of the expedition team are faring well with some guests watching the departure process in the early hours of the morning. Even with the ocean swell of the coral sea and some breeze the guests enjoyed a hearty breakfast to start the day and embrace the conditions in a little more comfort than the seafarers that preceded us.

We have a few miles ahead and our estimated time of arrival at Kenn Reef is 08:00 on Wednesday morning. Then we will setup for the day and go in search of reminders of past explorers and seafarers. 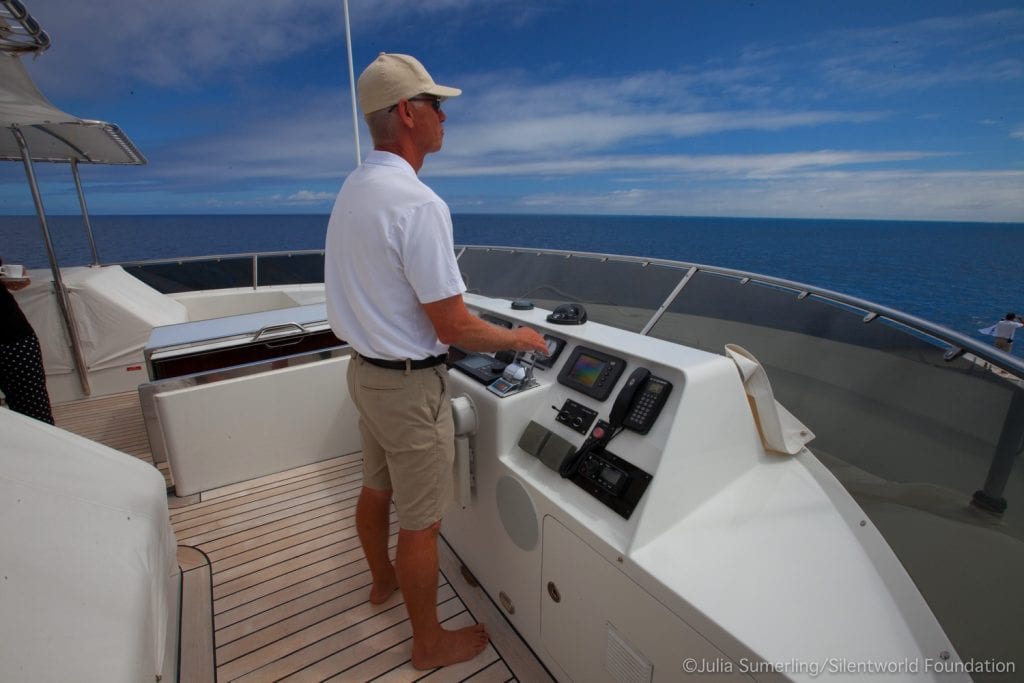 With the first hours of daylight sinking we were well off the continental shelf. The winds were similar with average winds of 15 knots and a underlying 2 metre swell. Travelling through the night we encountered no other vessels and were slowed a little with a 1 knot current setting to the South.

We passed Wreck Reef to the east during the night and as we approached the Kenn Reef atoll in the morning the sun was rising and the day had begun. We had breakfast underway in the final few miles as we slowly approached to obtain a suitable anchorage close to Observation Cay. We anchored in 15 metres of water with 2.5 shackles of chain laid out.

Immediately after confirming the anchor being set we had the purpose built tender being rigged for magnetometer runs and the shore party set to take metal detectors ashore on observation Cay. The cay is the location where reports of the Bona Vista crew were hold up after coming undone on the reef. This is the initial phase of the expedition to make a quick survey of the area before laying plans this afternoon and the remainder of the expedition.

Observation Cay was covered in artefacts and the real work will be piecing where the artefacts came from and which ship. None of the artefacts were salvaged but documented and the afternoon was expected to give further evidence. Unfortunately, there were lots of evidence but none that was concentrated in one area to indicate one particular ship. The team returned to SILENTWORLD to peruse over charts and articles from the corresponding era with the purpose of planning the next survey of the area. 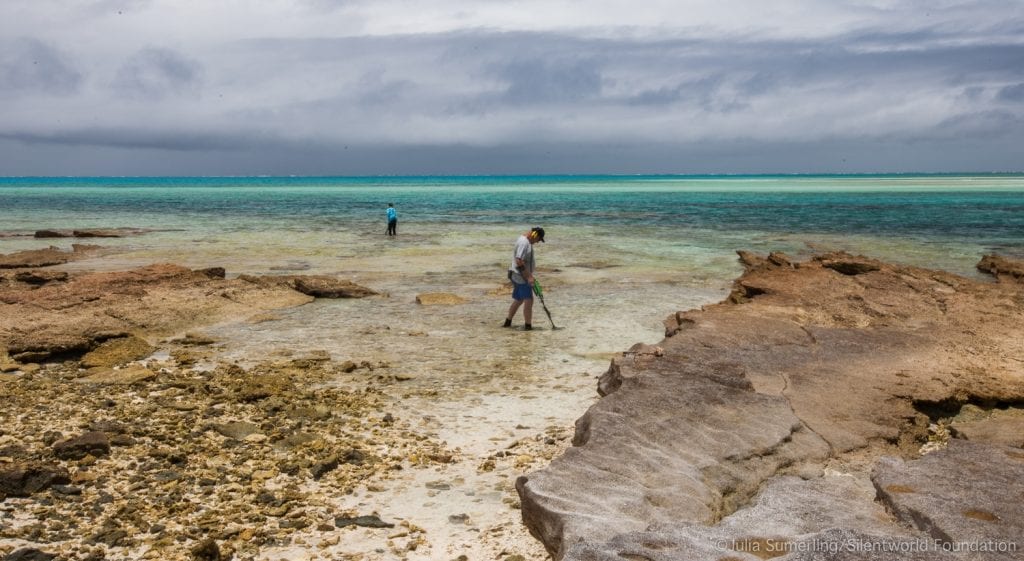 With the sun rises a new day with calm seas and a gentle breeze from the North. There is a little swell from the North but the conditions are good for history hunting.

The Silentworld Foundation team got up early and with breakfast at 07:00 everyone one was off in their parties with some snorkelling and others running with the magnetometer over areas of reef alleged to be the resting place of ships past.

There were some significant hits with the magnetometer in the morning in areas previously not associated with wreck sites. With that the team returned for lunch and to reassess the strategy for the afternoon. The teams split into two. The first group went to scour the reef edge with the metal detectors and came across small finds but limited significant discoveries. The second group went for a dive on the site with the magnetometer hits from the morning. The group went in on mass bit found little to support the magnetic anomaly. The search continues

Overnight we were at anchor 280 nautical miles from Bundaberg and we seem to be in the midst of storms, and thunder. There was not much wind associated with the squalls but the morning showed that we were on the edge two pressure systems. We waited for some of the storm to pass before heading out with the first research team and the magnetometer. The Silentworld Foundation tender with the magnetometer in tow ventured out to verify the location of the previous days findings. The plan was to reconfirm the findings and then dive on the location to discover what had triggered such great data. The findings were extremely promising.

Unfortunately the same location visited today presented different data results from yesterday. It was as if the wreck or the remains had disappeared like some ghost ship. Is Friday the thirteenth playing tricks on us? There was no trace of the magnetic anomalies previously acquired and the previous day’s findings will remain a mystery for now.

After lunch the second Silentworld Foundation team split into two and scoured the reef edge in search of hints to the location of various wrecks recorded as being lost on Kenn Reef. The afternoon proved fruitful and with the discovery of some ship’s frames and additional components the discovery of our history continues 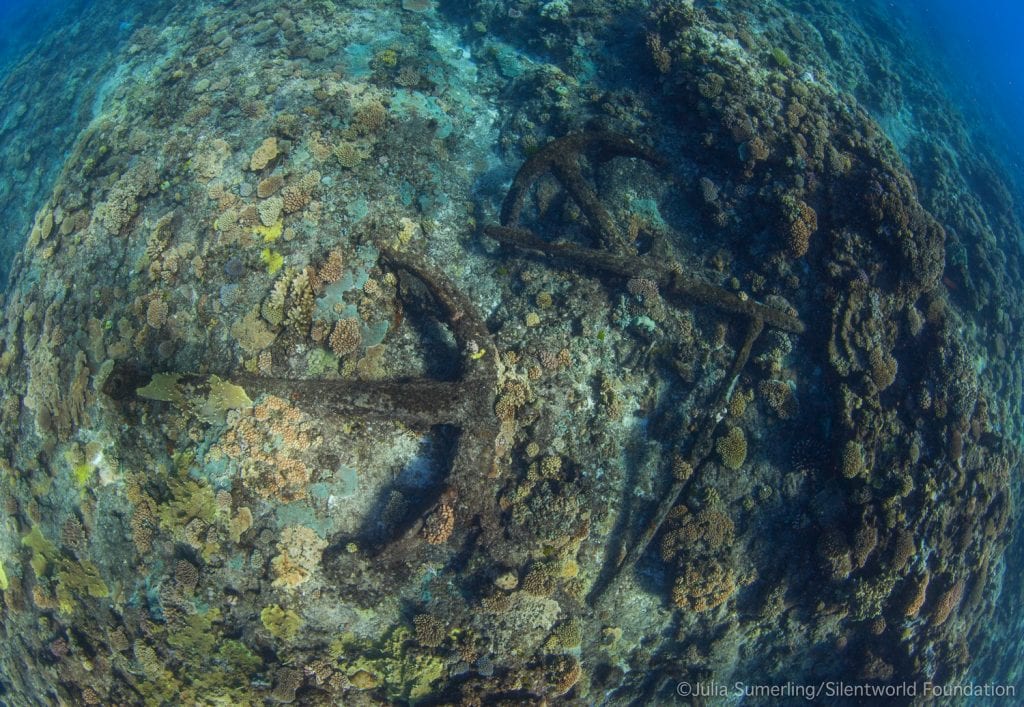 At anchor overnight 280 nautical miles from Bundaberg and the sand cay we are anchored beside held a little surprise. Among the remains of lost ships lies a sand cay. This little island now plays host to the nesting area for green sea turtles.

A few of the Silentworld Foundation team ventured ashore under the lights of the full moon.

This morning the Silentworld Foundation tender with the magnetometer in tow ventured out to the outside of the reef to survey the area. The previous day did see some significant finds and the magnetometer is being used to see if any of the ship wreckage has washed back down the edge of the reef

That combined with two teams of divers should see some significant finds and confirmation for the day. In the morning dives combined with the finds from the previous day has discovered a significant wreck site. With the discovery of anchors and a cannon the mystery of what ship it was and who was onboard is yet to be discovered.

At anchor overnight and the sand cay was lit by the waning moon as turtles came up to lay their eggs. It is like they are the guardians of the reef and the people who were stranded here. Some survived. The Silentworld Foundation team ventured out on the outside edge of the reef. The prevailing winds here are South East and being able to get to this edge is sometimes difficult. The weather conditions were right over the last few days for the crew to scan the edge using the magnetometer and visual reference with the use of a Manta Board 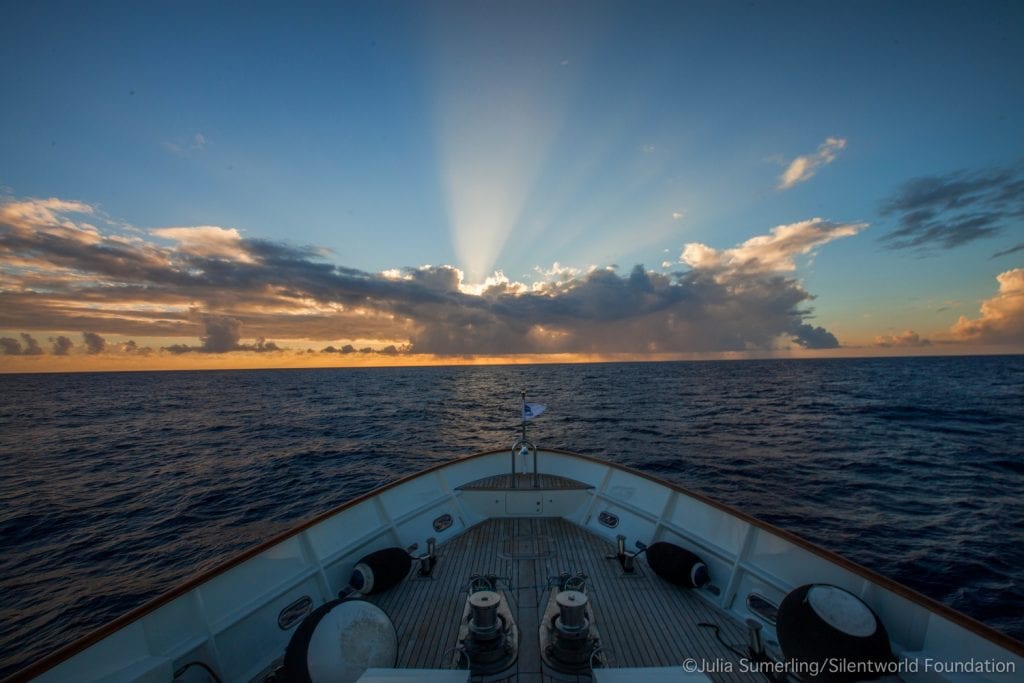 The weather has been brilliant for us to be able to access remote locations. We have remained at the same anchorage each day in the lee of the sand cay

The Silentworld Foundation teams ventured out each of the last few days with the prevailing winds being South East and slight. As mentioned the previous days gave access to previously unknown wrecks. These previously unknown wrecks are now still being further studied to assess if the wrecks can be identified and brought to life through history. While this was happening more wreck sites were found and others were expanded on.

The expedition has been a huge success and the crew are now gathering the photographic evidence, documenting each day’s activities and findings for the benefit of all of us.

The wind has increased overnight out at the reef with 15 to 20 knots of wind from the South-East and the swell increasing to 2 metres. At the moment we are packing all the instruments and dive gear in preparation for our trip back to Bundaberg. We plan to depart at 18:00 tonight with an arrival into Bundaberg of midnight tomorrow night

The expedition has been a huge success and will be revealed by the Silentworld Foundation with the new findings. 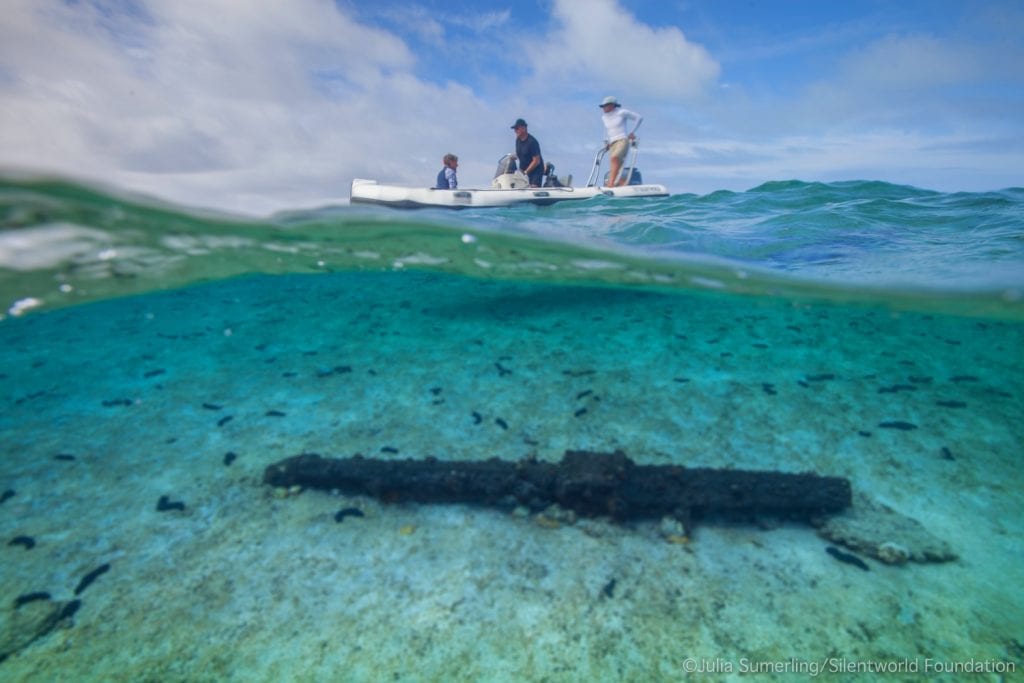 To read the media coverage about the expedition: http://www.abc.net.au/news/2017-01-20/wrecks-of-three-mystery-19th-century-trading-ships-found/8194838?pfmredir=sm

SILENTWORLD is available for charter in Australia and in French Polynesia this year, through Ocean Alliance.
Please enquire or call Laurie Foulon for more information: +61 424 599 889

Media and PR enquiries: info@oceanalliance.com.au to find out more.
Follow Ocean Alliance on Instagram for daily news and updates (@ocean_alliance)