Master chef Alessandro Pavoni who heads up Ormeggio at The Spit on Sydney’s northside has travelled the world cooking modern Italian delicacies. Ocean sampled a menu of five courses aboard Gulf Cra’s elegant Ghost II. From Brescia, Italy, Alessandro Pavoni recalls a childhood spent at the elbow of his nonna. “Grandmothers are almost always the best cooks in Italian families,” he explained. “And it didn’t take me long to realise that mine was incredible. My grandfather had 11 brothers, and my grandma had to cook for all of them after their mother died. I remember on Sundays, she would wake up early and prepare a feast for the family. As a kid, she would give me jobs in the kitchen, and I would help her cook ravioli or spaghetti. I’d even stuff the hens! I gained a lot of inspiration from her.”

When this passionate chef arrived in Sydney 15 years ago, he was frustrated because of what he saw as a dearth of quality Italian food. “There were a couple of good Italian restaurants, but the rest were pretty average. Quality produce was also hard to get. In the past five years, though, there has been an amazing change in Sydney in the quality of produce and producers, as well as the calibre of chefs and [Italian] restaurants.” Having worked with world-famous chefs Iginio Massari and Giuseppe Maffoli in Brescia, at La Rotonde in France, the Michelin-starred Villa Fiordaliso on Lake Garda, and even at Restaurant Lido in Bermuda, Chef Pavoni moved to Sydney in 2003 and was appointed Executive Chef at the Park Hyatt in 2005.

In 2009, Pavoni rolled the proverbial dice again and started his first restaurant venture, Ormeggio at The Spit. The blend of contemporary flavours, techniques and textures with his northern Italian culinary heritage proved an instant hit. Pavoni says, “I love to embrace traditional recipes that have been handed down through the families of my region and mix it with local produce.”

This passion and enthusiasm led Pavoni to work further at promoting quality Italian culinary culture in Australia, signing on to serve on the executive committee of the Council of Italian Restaurants in Australia (CIRA), a position he holds dear to his Heart. While guests sipped French champagne and devoured what Alessandro and his team call their interpretation of baccala cappuccino — salted cod, slow-cooked in milk and olive oil with anchovies, brioche croutons and Dutch cream potatoes cooked in cream and milk — we were treated to fresh crostini topped with a burrata and anchovy mixture. As the boisterous chef was quick to point out, the stracciatella cheese is the hero of the dish as it brings everything together and enhances the anchovy.

Taking our seats in the spacious cockpit of Ghost II, optimised for Australian conditions and our penchant for dining alfresco, it wasn’t long before our master chef arrived from the galley armed with plates of Vitello tonnato. Comprising veal tartar, anchovy dressing, homemade tuna mayonnaise, roasted pine nuts, sourdough croutons and fresh watermelon radish, this ravishing dish was breathtaking, and expertly paired with a blissful 2015 Piazzano Messidoro Sangiovese-Syrah rosé. It wasn’t long before another northern Italian wonder, Venice, came into the picture through a delicious, full-bodied 2012 Palazzo Delle Torri Allegrini Valpolicella Superiore red wine, exquisitely paired with what would quickly become my favourite dish of the day, brasato: a wagyu beef cheek, marinated for seven days in red wine, slow-cooked and then grilled over charcoal.

Dessert, tiramisu in textures paired with a wickedly sweet 2015 Zaccagnini Plaisir, was full of this family’s love and reflected their shared Italian pride. 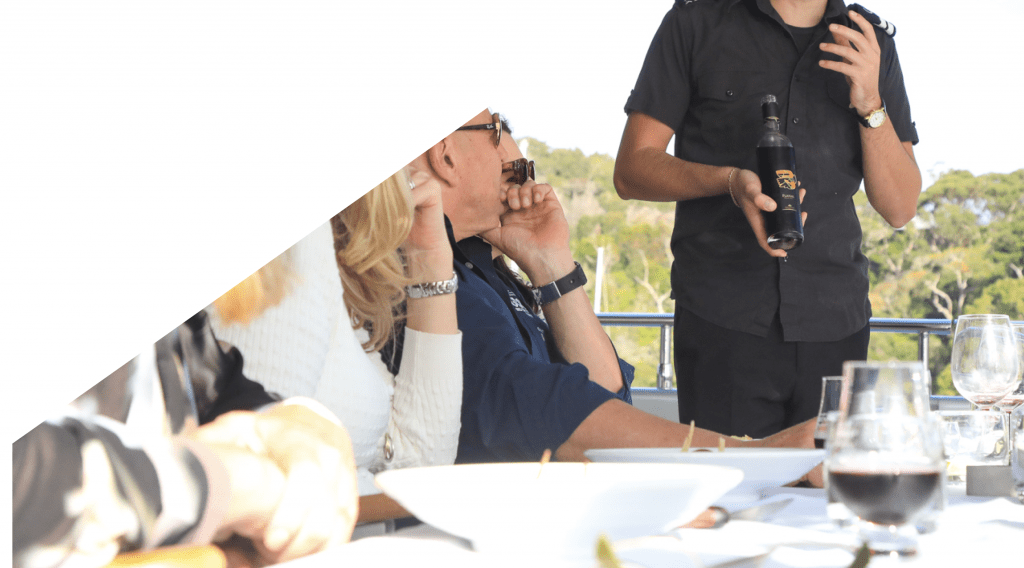