A voyage on a superyacht in Australia is the epitome of freedom, charting uncrowded waters of breathtaking beauty in the capable hands of some of the industry’s best people.

Imagine a luxury villa with no fixed address – a guest list of your choosing, a different view out your window each morning and every indulgence at your fingertips. A superyacht charter might just be the ultimate way to travel. And Australia is emerging as one of the best places on Earth to step aboard.

From a world-famous urban harbour to the largest coral reef on the planet, Australia’s coastline has to be seen to be believed. And with year-round cruising, a reliable infrastructure and South Pacific islands as neighbours, it’s an ideal superyacht playground. Despite these credentials, those tempted to venture to the Southern Hemisphere will soon discover that unlike the Caribbean and Mediterranean, where finding an empty beach is a competitive sport, Australian waters remain blissfully crowd-free. There’s no such thing as a one-size-fits-all adventure on an Australian charter yacht. Active travellers need never sit still, with world-class diving and snorkelling, fish-filled waters, pristine surf breaks, coastal hikes and more. Foodies can sate their appetites with feasts crafted by private chefs using produce of unmatched quality. 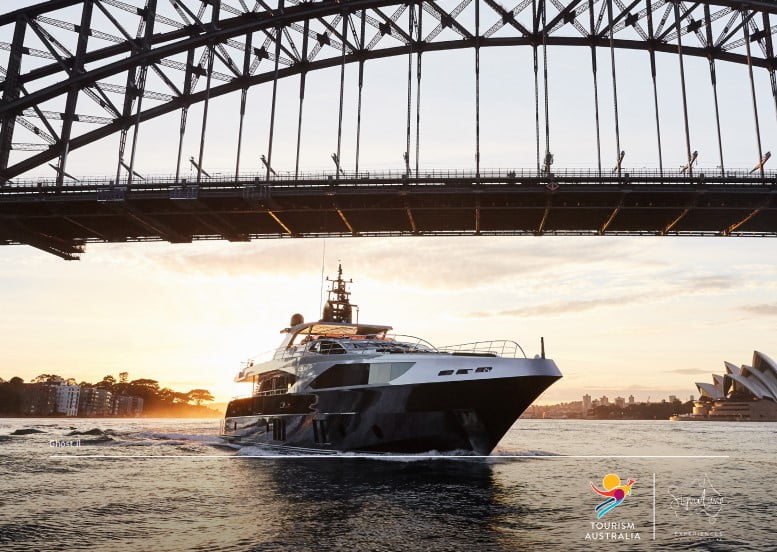 Those craving luxury will find it, whether on the top deck at sunset with champagne or on a helicopter being whisked to a private beach. With 35,000 kilometres of coastline to explore, the tide can take you wherever you will it to.

Alongside the big-ticket destinations – the Great Barrier Reef’s underwater wonders, the crystalline bays of the Whitsunday Islands and the iconic silhouettes of Sydney Harbour – Australia’s vast shores hold myriad surprises. From the wild Kimberley region up north, with its king tides and ancient Indigenous heritage, to the untrodden sands and natural bounty of Tasmania down south, Australia is a single nation of a million possibilities.

No matter the destination, at the core of the superyacht experience is the people. The Australian superyacht sector is driven by a passionate, closeknit community with a wealth of expertise to offer – whether it be captains, crew, charter agents, marina owners or industry leaders. Surrounded as we are by water, the ocean is interwoven into Australia’s national identity – an affinity that has made Australians a fixture on the international superyacht scene. Now, as attention turns to our shores, meet the mariners steering the future of this luxury industry at home. 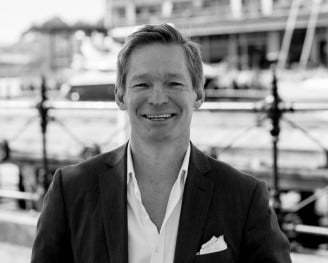 For Ocean Alliance managing director Joachim Howard, not much comes close to the experience on a chartered superyacht. The ability for guests to customise every element of their journey – from the itinerary to cuisine to activities – along with the flexibility to change any element at any point offers a level of freedom not often found in the luxury travel market. “Every element of that time that they spend on the yacht is curated for them,” he says. Joachim discovered this heady world in his early twenties, cutting his teeth on crews in Europe. Born beside the Pacific in Papua New Guinea and raised in Victoria’s Mornington Peninsula, sandwiched between Port Phillip Bay and the wild Bass Strait, Joachim had grown up on the water – surfing, diving, then crewing tourism boats and ferries. The eight years he spent on superyachts exploring Europe, the Americas and the Caribbean he wouldn’t exchange for the world.

Returning home in 2006 and moving into yacht brokerage, Joachim quickly realised there were no full-service companies in Australia managing large charter yachts. He founded luxury yacht agency Ocean Alliance in 2011 with a single vessel on the books, and now offers anything from day trips to weeks-long charters onboard the region’s fleet of superyachts operating around Australia and the South Pacific. The business has grown in tandem with Australia’s industry, which Joachim believes is benefiting from charterers’ increasing desire to explore places they haven’t chartered before. His ambition is to help more local and overseas guests discover the Australian superyacht experience for themselves. “Because I think it is a really special experience, and one that can provide such great exposure to what Australia has to offer.”

“The yachting experience on a professionally crewed vessel is completely customisable, completely curated… Every touchpoint, every component of that experience is customised to the charterer and their group.” 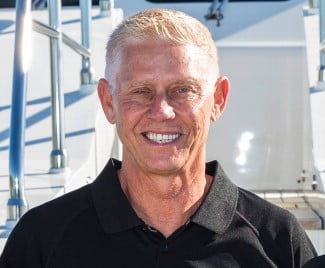 Between stints in the navy and on prawn trawlers, dive boats, fast ferries, island resorts and now yachts, Michael Gooding has well and truly earned his sea legs. It’s a wealth of experience Michael draws on as captain of 40-metre superyacht Silentworld, in an industry that he believes can underestimate the skills people from other sectors contribute. It’s why he invites every new addition to Silentworld’s tight-knit crew of eight to audit their existing procedures. “The fact that I’ve been in those other industries makes me believe that the same applies to other people as well – they bring other things to the table,” He says. “There’s always different ways of achieving a similar result… so I like to be able to be a little bit flexible.”

Adaptability is an indispensable trait for a charter captain, who must tailor every trip exactly for each guest. “Five star is about bespoke service – it’s not about a particular style, because everyone’s different,” Michael says. His role, which calls for a mixture of maritime skill and toplevel service, “clicked” for Michael, who knew he’d found his calling on Silentworld, which he’s captained since 2016. With most of their typically welltravelled clientele used to the crowded Mediterranean, Michael’s team makes full use of Australia’s unspoiled waters. “It’s a unique opportunity for people that like to be surprised,” he says. “It’s about us as a team working together and going, ‘This is going to be the best trip that they’ve ever been on. They’ve chartered 30 boats prior to us, and this is the one that they’re going to remember’

“I love my job and the rewards it brings. I am able to offer guests an experience they will remember, and that is a trait and value that I try to bring to the team.” 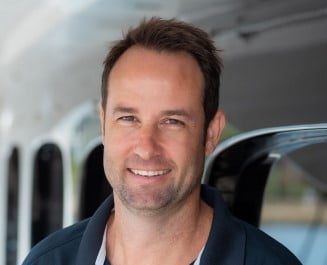 Sean Prosser starts planning his charters months out. Poring over charts, chatting to locals, putting in calls to other captains who have visited the intended destinations – as captain of the 40-metre Infinity Pacific, Sean thrives on finding new and unexpected experiences for his guests. By the end, every detail will be sorted – from isolated anchorages to secret fishing or snorkelling spots: “That way, when guests arrive, everything is already arranged making things flow seamlessly to ensure they have the most relaxing and enjoyable experience,” he says. Born in Perth, Sean was ocean-bound as much as possible from an early age. “It became a passion of mine to essentially be on the water as much as I could,” he says. By 25, he’d headed for Europe, working up from deckhand to captain over 10 years on Mediterranean superyachts.

Although his time overseas exposed him to amazing places, Sean views it as the culmination of his career to be back cruising Australian waters. Australia’s scale means the Infinity Pacific can charter year-round, visiting the urban hubs of Sydney and Melbourne in summer and taking in the sun-kissed natural wonders of the Whitsundays, the Kimberley and northwest coast in the Southern Hemisphere’s cooler months. Wherever they journey, Australia’s isolation is a balm for Sean, after the crowded international scene. “You can get out there and get into some of the most pristine waters in the world and not see another yacht for a day or two, which is unheard of in the Caribbean, the Americas and especially Europe,” he says. Sean is never happier than when he is exploring on the edges of the map. “Ultimately that’s why I do this job – to explore the world.”

“The guests love it. We’re finding them these amazing locations to have a barbecue on the back deck while they’re fishing as the sun sets on a 40-metre superyacht. Everyone’s having a good time.”