Environmental awareness and sustainability have definitely been a popular topic throughout 2019, within the high-end travel sector and transcending through to the superyacht industry. With more general concern, actual observation of seascapes changing, yacht owners wanting to get involved and education being provided about the planet, this year has already been presented with several developments to increase environmental sustainability.

More superyacht owners are beginning to appreciate that they can play influential roles when emergency situations arise and are seeing opportunities to utilise their vessels in different ways: thanks to their size, freshwater production, cruising range and speed, superyachts can make an ideal first-responder. A perfect example of this was superyacht DRAGONFLY, who responded to tropical cyclone Pam in Vanuatu. Mike Gregory and his crew onboard DRAGONFLY had been watching the severity of the weather develop and after they found out the devastating impact it had on Port Vila, the Owner and Crew made the call to deploy to the area. Gregory and the crew spent one day loading up food, water and other supplies, and off they went to assist. 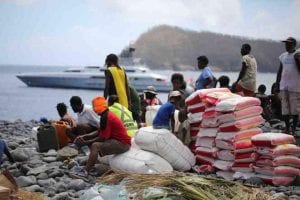 Apart from superyacht owners, captains and crew, the industry is also seeing many superyacht builders, designers and brokers doing their best to help protect the world’s oceans. An example includes Andrew Winch, founder of the London-based design firm Winch Design, who has created some of the most influential and high-valued superyachts in the world. Winch is the founding sponsor of the Blue Marine Foundation’s London to Monaco bike ride, which focuses on raising money for ocean conservation in innovative and effective ways. Since being an integral part of the foundation, Winch Design has raised $250,000 which has allowed them to continue projects all over the world! Such initiatives also have the power to connect passionate individuals around the single element which allows them to flourish: water.

Living, working and breathing by the ocean’s shores, the team at Ocean Alliance is proud to have been spreading awareness on sustainability for several years now. Through their no plastic policy inside the office, encouraging yacht owners and captains to get involved with philanthropy, and organising a series of beach clean-ups exclusively aimed at actors of the superyacht industry [link to video], some inspiring adventures have been conducted.

In 2018, BELUGA set out to explore the Coral Sea Island territories: a group of reefs almost halfway between Australia and New Caledonia. Their mission was to survey the sand cays for plastic and other rubbish and of course if found, to help minimise it as much as possible. From afar the captain and crew thought it looked quite clean as they approach Kenn Reef, however upon closer inspection the appearance of (micro and macro) plastics and other consumer waste was inevitable. The team dedicated several hours collecting all sorts of plastic remnants thanks to their shallow-drafted tender, MINKE. Earlier that year, the yacht took part in the production of BLUE, a now worldwide-recognised documentary about the state of our oceans. 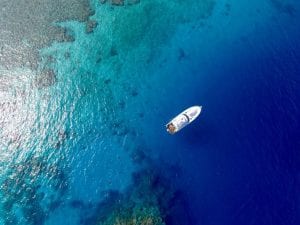 In 2016, MASTEKA 2 visited Fiji with international guests. The Principal loved his experience so much he wanted to know how he could “give back” and help some of the people he had met throughout his voyage. After a few conversations with the Captain and the elders of a Fijian village, they decided that laptops for the school children would be a much-needed gift, giving them access to technology and empowering them forward in the modern world. The gentleman generously equipped a whole Fijian school with laptops to help improve education and make a difference in the children’s lives. An incredibly moving gesture!

There are many amazing things that can be practiced within the superyacht & travel industry, and we believe the first steps to reaching a healthier planet, is to open up a conversation.

At Ocean Alliance we strive to survey the yachts we work with, be curious about ways to support their initiatives whether onboard or when in marinas, and create a holistically connected experience for Owners, Captains, Crews and charter guests anywhere in the world.

“Never doubt that a small group of thoughtful, committed citizens can change the world; indeed, it’s the only thing that ever has.” Margaret Mead.