Incredible scenery, a sense of a seclusion and access to the Great Barrier Reef make the warm waters of the Whitsundays just about the perfect place to privately charter a superyacht.

Imagine a yachting destination with all the charms of the Mediterranean and the Caribbean – the picture-perfect scenery, glamorous ports, and dazzling diving and snorkelling – but with a fraction of the crowds. That’s the Whitsundays: a collection of 74 islands sprinkled along Australia’s north-eastern coast, right by the Great Barrier Reef.

“It’s not a secret destination, exactly … but compared with the Med and the Caribbean, where the superyacht industry is predominantly based, it’s very calm,” says Michael Gooding, captain of the superyacht Silentworld, which is available for charter in the Whitsundays. “Over there, it’s wall-to-wall boats, but here you could be cruising past an island and find no other boats at all.” 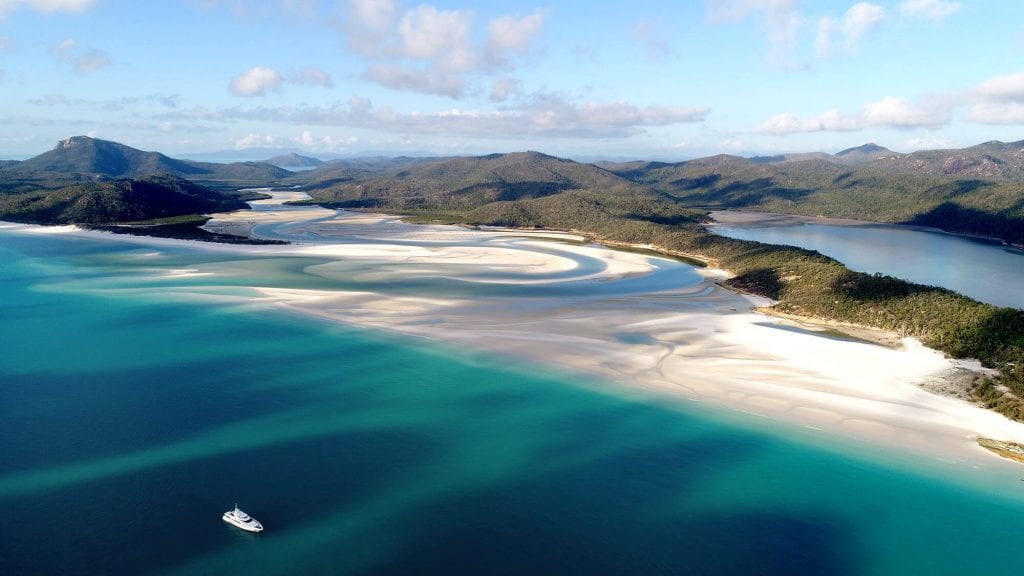 Australia’s relatively small population and tucked-away location might keep visitor numbers down, but that doesn’t mean the Whitsundays is lacking in amenities or infrastructure. On Hamilton Island, for example, visitors can recuperate at qualia resort, or play a round of golf on a championship course. Nearby, at the coastal town of Airlie Beach, there are fabulous facilities for superyachts at Coral Sea Marina and a smorgasbord of excellent waterfront restaurants, including the critically acclaimed Italian option Sorrento.

“The Whitsundays offers a very broad variety,” Gooding says. “You can have lunch on a deserted beach and socialise at a five-start resort on the same day. It makes my job easier because I can adapt the itinerary depending on what sort of visit my guests want.”

Most superyacht owners visit the Whitsundays during the Australian winter: June, July and August. “That’s partly because June to August is the main holiday period for people who live in the Northern Hemisphere,” says Matthew Baily, captain of the superyacht One World, which is available for charter in the Whitsundays. “But it also happens to be the best time to be cruise here: the average temperature is about 28 degrees Celsius [82°F] and the water temperature is about 23 degrees Celsius
[73°F]. It’s just beautiful.”

Another option is to visit in the Australian spring (September to November), or autumn (March to May), when temperatures are higher. The weather is generally fine in spring, autumn and winter. Summer in the Whitsundays, from December to February, is typical of tropical climes: it can bring monsoonal conditions and afternoon showers.

Whatever time of year you visit, chances are you’ll begin on Hamilton Island, the largest inhabited island in the Whitsundays. This rainforest-clad gem has a small airport that accepts both private jets and commercial flights from Sydney, Melbourne, Brisbane and Cairns. 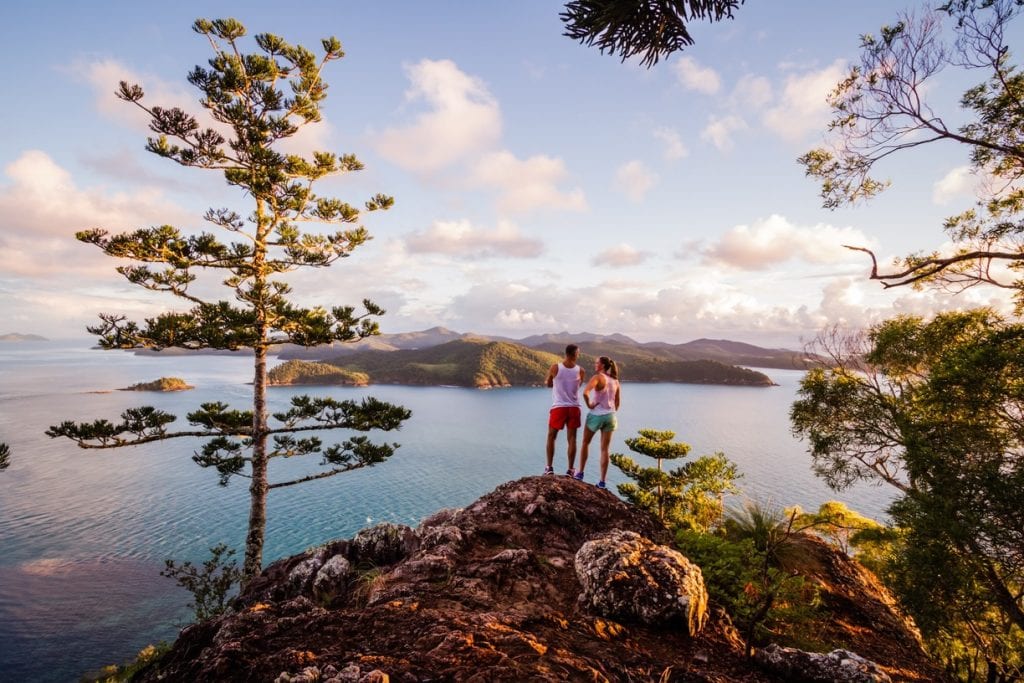 “Depending on where they’ve travelled from, some guests might opt to spend a night at qualia,” Baily says. The resort, which covers the northern tip of Hamilton Island, comprises 60 secluded guest pavilions, an award-winning spa, two restaurants and two bars. Alternatively, a string of waterfront restaurants and shops provide an ideal quick pit stop, before you set out to explore nearby waters.

After leaving Hamilton Island, your first port of call is likely to be the thickly forested, uninhabited Whitsunday Island, which lies a few kilometres due north. It’s here that you’ll set eyes on the most photographed spot in the Whitsundays: Whitehaven Beach, a blindingly white crescent of sand along the island’s eastern flank. “The sand has the highest silica content you’ll find anywhere in the world, so it stays cool even on very hot days,” Baily says. “You really can’t beat it.”

At the beach’s northern end, a tidal cove known as Hill Inlet is an ever-evolving vision of white and blue swirls, best viewed from the lookout at nearby Tongue Point. The island’s interior is also worth exploring on one of the several walking tracks.

“If you speak to any superyacht captain or to locals in the Whitsundays, they’re all going to say Whitehaven Beach is a must-see,” Baily says. “The downside of that is that it can get busy.”

Even during peak season (September and October), Whitsunday Island is probably the only spot in the entire region that can feel this way. The advantage of visiting on private charter is a higher chance of having the beach all to yourself – especially if you arrive early in the morning, or are visiting the region outside peak months (as visiting guests from the Northern Hemisphere often are).

Alternatively, chart a course for one of the dozens of islands that receive few – if any – visitors. Gooding says the Lindeman Group, to the south of Hamilton Island, attracts few tourist boats. “The beaches there are just stunning,” he says. “There’s Lindeman Island itself, Maher Island, Thomas Island … On Thomas Island, we’ll often do a beach barbecue and our guests will be the only ones there. It’s incredibly tranquil.” 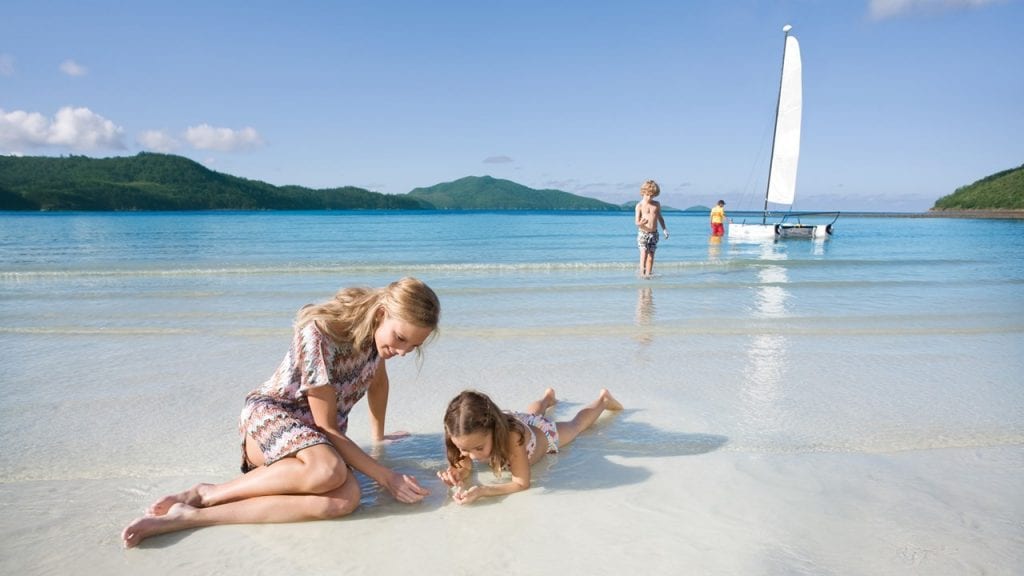 Baily is a fan of the Lindeman Group, too. “Shaw Island has a couple of hidden beaches that are stunning,” he says. “The south-eastern side of the island, in particular, is a place where not many people spend a lot of time. When there are northerly winds, we like to sneak up there.

“Because it’s quite far away from any man-made structure, you really feel like you’re immersed in the national park. Not many people travel that far south. It’s a very quiet, unique place. You can generally have a bay to yourself and a beach to yourself.”

Then, there is the Outer Great Barrier Reef, which can be reached in a little over an hour. Highlights are numerous, including Heart Reef (shaped like a romantic love heart), the fishing hotspot Black Reef, which sits just outside the protected green zone, and far-flung Agincourt Reef, which has 16 scuba dive sites. “Many of the Whitsunday islands have fringing reefs, too, which provide excellent snorkeling,” Baily says.

Because the Great Barrier Reef is so vast, experienced superyacht captains can all but guarantee you’ll have certain spots to yourself. Baily won’t reveal the exact location of his favourite patch of reef, but says: “We take guests out there for a couple of nights. You can’t see land – all you can see is the reef under you. It feels utterly remote, but it’s only two hours’ cruising back to the islands. That’s the beauty of the Whitsundays.”