The first thing that hits you is the colours. The impossible blue of the water, a shade shimmering midway between turquoise and aquamarine, smacking up against the rust red of the shore. It’s such an otherworldly combination that, as you sail away at the start of your Kimberley cruising adventure, you swear you will spend your entire trip just staring, entranced, at the point where the water meets the earth.

Spoiler alert: you won’t. On a cruise through the Kimberley, Australia’s most remarkable wilderness, there is simply too much else to look at. There are dramatic gorges and tranquil waterholes, crocodiles basking on riverbanks, and thousands of uninhabited islands where few people have ever set foot. In the morning, the sun falls onto craggy sandstone cliffs that were formed an astonishing 1.8 billion years ago; in the evening it sinks into the ocean in a fiery ball. And at night, the heavens light up with a billion stars that blaze with an eye-watering intensity. 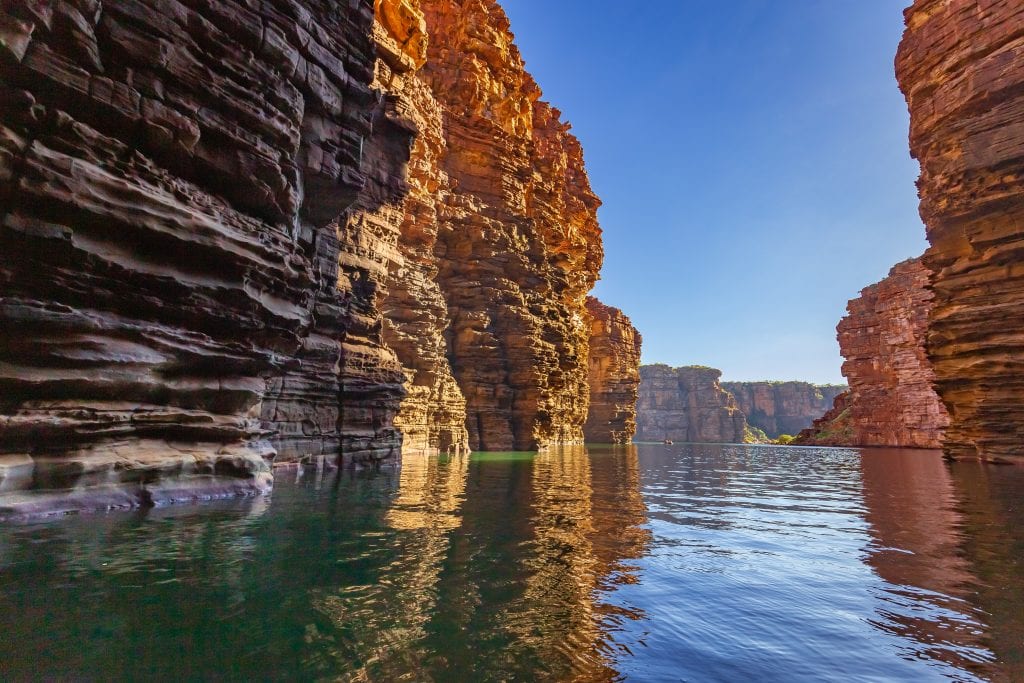 King George River – Northern Kimberley. falls off the Kimberley Plateau with a thunderous roar directly into the ocean far below.
A very wild and remote place accessible only by boat or helicopter.

“The Kimberley is so far removed from any other yachting experience,” says Jo Howard of superyacht charter company Ocean Alliance. “Visually, culturally, spiritually – it’s like nothing you’ve seen before.”

It is also vast, covering more than 400,000 square kilometres (150,000 square miles) of north-western Australia. With only a handful of roads carved into the ancient landscape, exploring the Kimberley by superyacht is not just the most spectacular option – it’s also the most practical. Your vessel can sail up canyons and into wide river mouths to where unexpected experiences await: perhaps a picnic on a rock plateau gazing out over ancient rainforest, or an afternoon dip in a deserted billabong, or waterhole.

Whether you embark from the laid-back pearling town of Broome or from Wyndham Port near Kununurra, there are plenty of destinations to explore. Take Montgomery Reef, which covers 400 sq km (150 square miles) and lies submerged during high tide, but seems to rise spectacularly as the waters ebb, creating an eye-catching landscape of lagoons and islets. Keep an eye out for turtles, which love to feed on the seaweed that grows here in profusion. 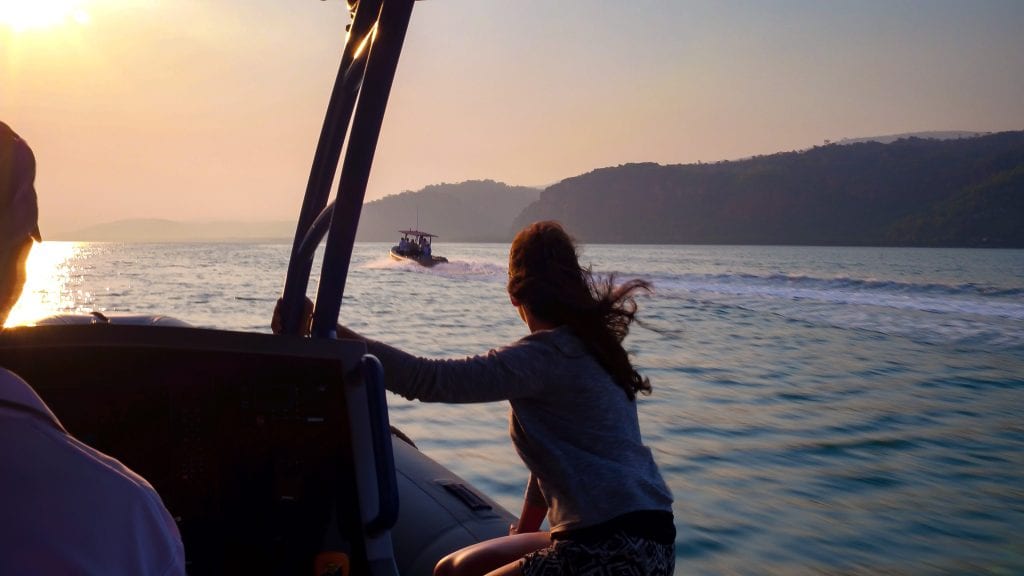 Then there are the Horizontal Falls at Talbot Bay, described by David Attenborough as Australia’s most unusual natural wonder. Powered by the Kimberley’s powerful 12-metre (39-foot) tides, the Horizontal Falls appears at the turn of the tide, when huge surges of water are funnelled through narrow gaps in the surrounding gorges. The water bubbles as furiously as a pot left boiling too long on the stove.

Don’t get the idea that cruising the Kimberley is just about sitting back and drinking in the spectacular landscapes, however. “There is simply so much to do here,” says Peter Trembath of True North Adventure Cruises, which spends several months each year plying the Kimberley waters. “Our guests love going mud crabbing, hiking to billabongs or heading out in the expedition boats with a naturalist to explore the mangrove forests. And of course, our on-board helicopter gives you an entirely different perspective on the area.”

For Howard, one of the things that defines the Kimberley is the rich trove of Aboriginal rock art that doubles as the world’s largest open-air art gallery. “It’s so incredible to visit these sites,” he says. “We really recommend that you travel with a good local guide who can put you in touch with the incredible culture and history here.”

While the age of these images is extraordinary – some of them are older than the Egyptian pyramids – their diversity is just as remarkable.  Dreamtime figures, vanished species and even cultural encounters were all faithfully recorded by generation upon generation of artists. At Bigge Island, for instance, the caves are layered with images that have been painted and repainted for more than 5000 years. 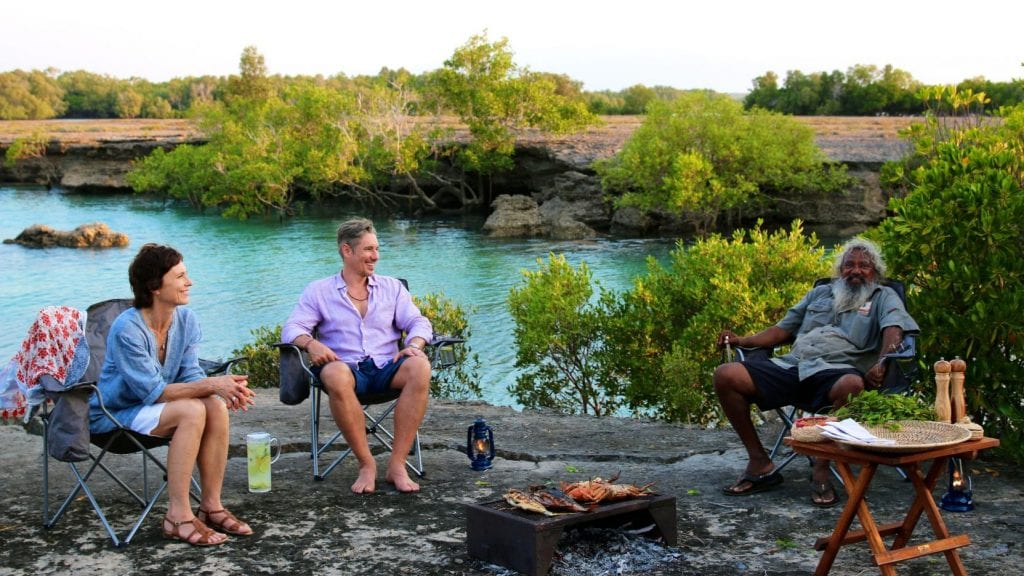 They include eerie Wandjina figures, their heads dominated by huge eyes and framed by haloes; images of an echidna species that’s now extinct in Australia; and carefully observed depictions of the various boats that sailed up this coast, from 16th-century Chinese vessels to European sailing ships manned by pipe-smoking, rifle-carrying merchants.

When you sail this region by superyacht, there is no such thing as a typical day. You control exactly how the experience unfolds. After a morning immersed in Aboriginal culture, you may want to spend the afternoon cruising up one of the area’s spectacular gorges, scanning the sand banks and the soaring red cliff faces for goannas or crocodiles. Or you might want to try your hand at catching barramundi, mangrove jack or trevally, which your chef can slice up to offer you the freshest sashimi you have ever tried.

Be aware of one other thing that sets the Kimberley apart from other superyacht destinations: if you want to dive off the back of the yacht for a quick dip, you will need to think again. Saltwater crocodiles patrol these serene waters. “The other side of this area’s ruggedness is that there are some dangers,” Howard says cheerfully.

However, that doesn’t mean you won’t get any opportunities to cool off – the landscape is studded with freshwater pools in which you can swim safely. The most spectacular place to take the plunge is arguably Mitchell Falls, a magnificent four-tiered cascade that drops through a series of crystal-clear rock pools before it plunges into the sea.

Howard has one other tip for anyone contemplating a superyacht sojourn in the Kimberley: add a visit to one of the area’s pearl farms. The shells of the Kimberley’s Pinctada maxima oyster were prized by Aboriginal Australians for thousands of years; trade networks distributed them across two-thirds of the continent. Large-scale pearling took off in the 1860s, when the world’s largest pearl oyster shell was discovered in Roebuck Bay, and pearling quickly became the area’s main industry.

To this day, Kimberley pearls are prized around the world. “It’s pretty incredible to be able to visit the place where the pearls are actually farmed,” Howard says. “A pearl may be lovely to look at but until you visit a pearl farm like the one at Cygnet Bay, you don’t really get the full story.”

IMPULSIVE relaunching into the Australian Market

Superyachts are known for their water toys. The more exciting and comprehensive the inventory, the more enticing the superyacht is for guests. Charterers can take their pick from an array of modern equipment… Read More