Our skipper sucks on a never-ending rollup while he gently tweaks the tiller in the light breeze. We are under full sail now, making steady progress north through Upi Bay, the bright red of the wooden outrigger cutting through shallow turquoise water. With my toes in the wash and the morning sun on my face, I’ve swapped one kind of sailing experience for an altogether different one. On the New Caledonian Isle of Pines, transport is by traditional pirogue dugout and this morning our destination is equally picturesque. After a 45-minute walk through tropical forest, we wind our way up river to the “piscine naturelle.” 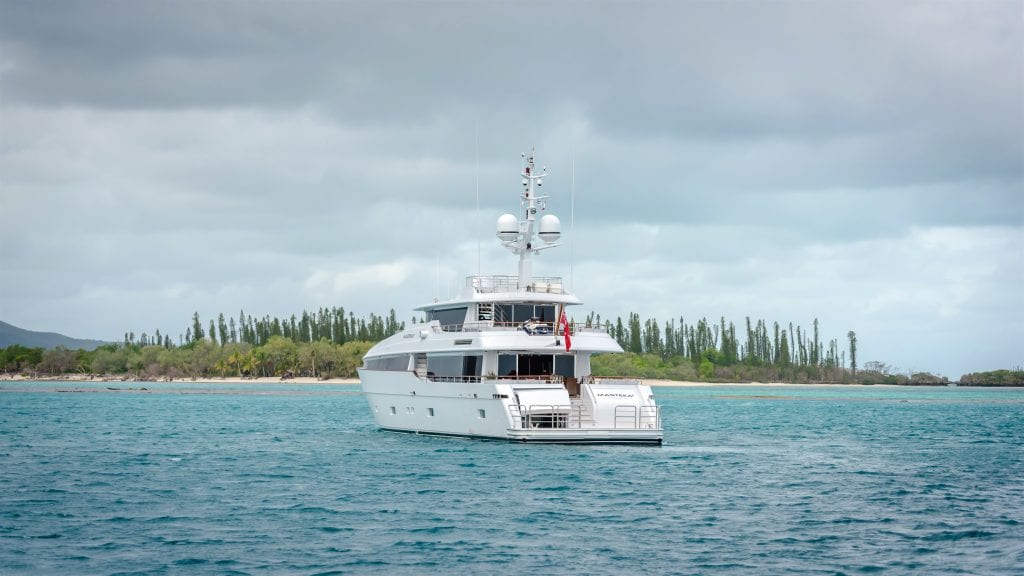 The pool is a happy accident of white sand, warm water and coral, fish and giant clams, all fed through a narrow channel from the Pacific Ocean. Like much of this South Seas island, it is fringed with native Araucaria pines, statuesque against the bright streak of beach. We are barely 60 nautical miles from Nouméa, the capital of French outpost New Caledonia, and a stone’s throw from some of the world’s best and least exploited diving spots. The Isle of Pines is a meeting of worlds: modern and ancient, colonial and tribal, French and Kanak (the indigenous Melanesian inhabitants), and, now, visitors and locals. The former come for the pure sand, clear water and pine trees; the latter’s deliberate efforts to remain separate from modern life mean that newcomers such as ourselves step into a land that time seems almost to have forgotten.

Local lore dictates that shrines protect the island’s eight tribes, while offerings to the land – a splash of coconut water, a bite of fresh lobster – nourish the spirits of ancestors. Hotel rooms are limited and many homes do not have running water or electricity. Most food eaten by the island’s 3,000 residents is fished or foraged and a single boulangerie takes care of daily bread. Life, the Isle of Pines way, is slow. Very slow. It’s a boon, then, to have the comfort of Masteka 2. The 122ft yacht (home ported in Sydney) is now the sole foreign-flagged superyacht to hold a charter license in New Caledonia, opening the territory’s largely untouched wilderness to those who seek empty surf breaks, breathtaking diving and solitary beaches.

Remote as those sound, they are surprisingly close to Nouméa. With a population of around 100,000, the city has everything to rival a small French metropolis, but colonial influence drops off swiftly away from the 250-mile-long mainland, or Grande Terre. The Loyalty Islands, strung along the north of the territory, are alive with tribal culture, while the rugged mainland itself is also worth a look, says Rebecca Edwards, our chief stewardess. Home to running, hiking and cycling trails, its mountains have become an adventure lover’s Mecca, while horseback touring is an ideal way to traverse from the cowboy culture of the mainland’s west coast to the tribal mores of its eastern shores. On the first night of the charter, as the sun sets over Prony Bay, just 30 nautical miles south-east of the capital, the ochre mud of flood-scarred valleys carved into the forested hillsides turns a deep shade of purple under the smudged sky. Surrounded on every side by the silent outcrops of the scrambled coastline, we find ourselves in a Jurassic world of hidden inlets, starfishshaped bays and islands fringed by the fizz of waves on reef. The nature is raw, but on board Masteka 2 all is mellow. Having snorkeled over the fringing reef amid staghorn coral and clownfish, we retreat to the spa pool with a glass of champagne in hand. As darkness falls, there is not a building, person or light to be seen from our mooring. We are utterly alone.

For a six-day charter, Matthew Stafford, the yacht’s captain, recommends heading south from Ile Ouen to some jaw-dropping diving spots in the five-island group, before casting east to the Isle of Pines. The entire area is a fraction of the world’s largest lagoon, a UNESCO World Heritage site that, thanks to tightly guarded restrictions, is a jewel among the world’s diminishing pristine underwater environments. In a roundabout way, nickel is largely to thank for this: without the metal-mining industry that drove its economy until recently, New Caledonia might have promoted its tourism far earlier – and the unvarnished beauty of these islands would have become as well visited as some of her neighbors. “When you get a good day, it is just beautiful blue waters and peace and quiet,” says Stafford of Masteka 2’s new cruising paradise. “The diving is fantastic, and in the right places the fishing is excellent. Finding another person on the beach is a busy day – and to me that isolation is beautiful.” Fully refitted in 2017 with cream leather and cherry and walnut finishes, the yacht sleeps 12 in five comfortable, neat cabins and feels spacious even at full capacity. Attention to detail is all part of the service from this tight-knit and highly experienced crew, from evening turndowns with inspirational life quotes left on our pillows to daily changes of table décor, and paddleboards and kayaks made ready at every stop. And their stories are colorful. Juliano di Fuccia, our first officer, spent many years sailing off the Kimberley coast in Western Australia, diving for sea cucumbers in the crocodile-infested waters. Fijian engineer Ioane Tava is an expert on this corner of the South Pacific, understanding both the culture and geography. Together, they can get anywhere New Caledonia’s waters allow. 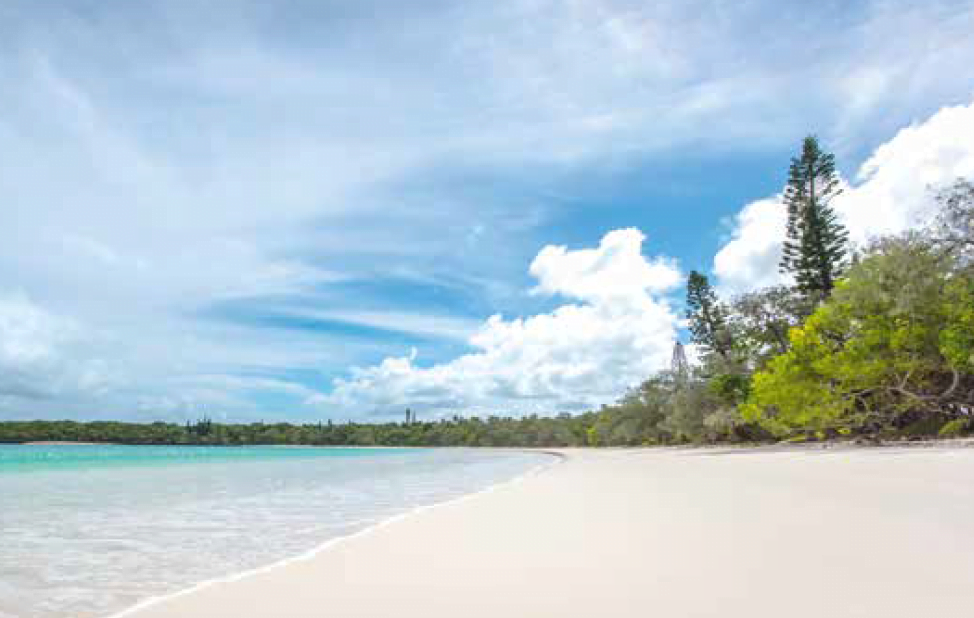 Fully set up for diving, the yacht can deliver guests to some serious coral action, thanks in part to local divemaster and marine scientist Bastien Preuss. In Prony Bay, he points out a whitetip shark, sea snakes and a green turtle. Later, at the Isle of Pines, we see remoras, drawn by our underwater lights as we cast hand lines at night. Australian chef Shayne Turbin is used to cooking the day’s catch. A culinary highlight is his Kanak-inspired fish curry, made with local blue prawns (their vivid hue is the result of feeding on the lagoon’s colored plankton). New Caledonia is also blessed with the gastronomical, if slightly counter-intuitive, advantage of its colonial connection. Jambon cru, gooey cheeses and foie gras – not to mention cases of Pouilly-Fumé and champagne – are regularly delivered from Paris, and all feature on the menu. Alongside breakfast platters of papaya, passion fruit and pineapple, we are served croissants and pains au chocolat, fresh from Turbin’s favorite boulangerie in the capital. “It’s a little bit of Paris on the Pacific,” Turbin says. “The French produce is amazing. You can’t get this anywhere other than France.” In his downtime, he can be found on Nouméa’s Baie des Citrons beach, under a palm tree, eating a baguette and cheese, watching the world go by. “Who doesn’t love that?” he grins. This, as one of my companions quips, is the real south of France. But it’s also home of a proud and vibrant Kanak culture. When the French arrived here in 1848, they found a people moving to their own rhythm, a place where cannibalism was alive and well and where tribal rule proved too strong to quash. The Isle of Pines remains largely tribally owned, its land protected by a single high chief, whose powerful family legacy has lasted more than two centuries. Venturing farther inland on the Isle of Pines, we make our way past yam fields and mango trees, dive down a barely signposted jungle track and into a vast, cool cave, stalactites piercing the pitch-black darkness ahead. It is said to be the site of Queen Hortense’s hiding spot, when, in the mid-19th century, her ascension to power angered her male relatives, forcing her into hiding.

This, as one of my companions quips, is the real south of France. But it’s also home of a proud and vibrant Kanak culture. When the French arrived here in 1848, they found a people moving to their own rhythm, a place where cannibalism was alive and well and where tribal rule proved too strong to quash. The Isle of Pines remains largely tribally owned, its land protected by a single high chief, whose powerful family legacy has lasted more than two centuries. Venturing farther inland on the Isle of Pines, we make our way past yam fields and mango trees, dive down a barely signposted jungle track and into a vast, cool cave, stalactites piercing the pitch-black darkness ahead. It is said to be the site of Queen Hortense’s hiding spot, when, in the mid-19th century, her ascension to power angered her male relatives, forcing her into hiding. 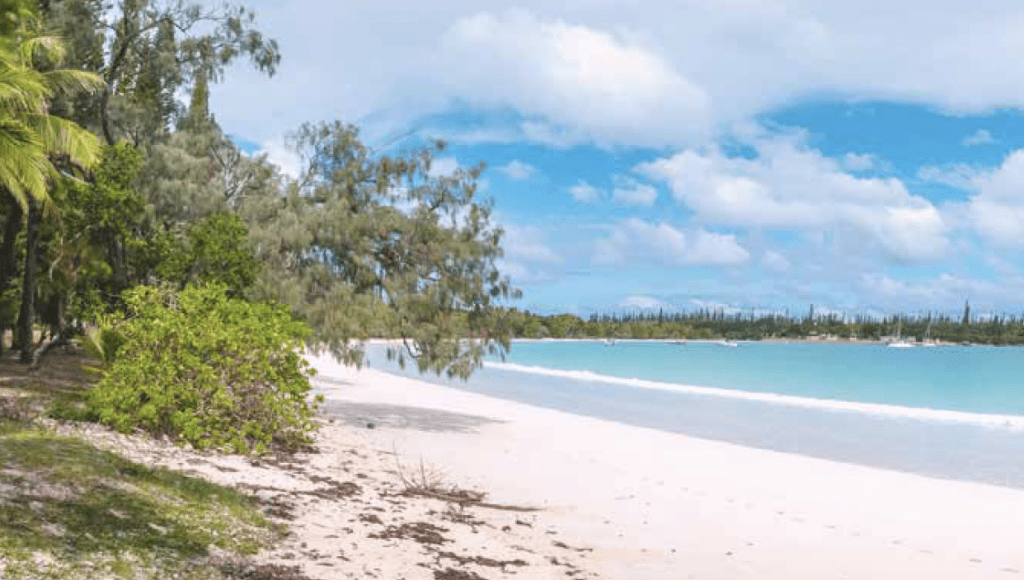 Nowadays the cave lies empty and cannibalism is a thing of the distant past – but the islanders remain keen to distance themselves from some influences of the outside world. “When they see what’s going on the other side of the world,” Zerena Vama, our local guide, explains of tribal leaders, “they realize that somehow, something’s not working.” Their solution, she says, is to limit visitor numbers and commerce on the island. “We take it very slowly,” she says with a bright smile, as she collects ripe passion fruit from the jungle floor. With its upcoming vote on independence, and a hunger from some quarters to reveal itself to the world, New Caledonia is poised for change. For now, though, it remains a well-kept secret. As they are fond of saying on the Isle of Pines: “Today’s today. Tomorrow, we’ll see.”