Papua New Guinea is Australia’s closest neighbour, yet it remains largely untouched by tourism. It is one of the least densely populated countries in the world, which means there are hundreds of uninhabited islands.  Tempted by adventure and a pristine marine environment, a group of friends excited about diving, snorkelling and fishing, embarked MY Beluga in March 2019 on an expedition to the islands and coral atolls east of Milne Bay. 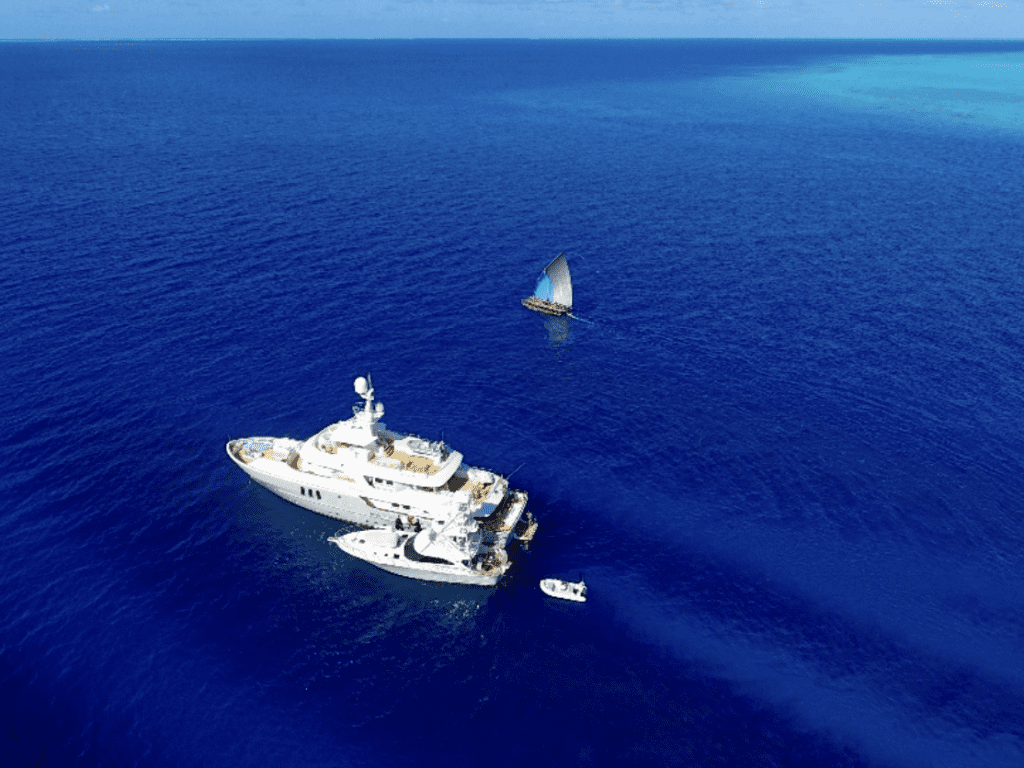 After a short plane ride from Australia, we arrived in Alotau via Port Moresby. Alotau is a sleepy tropical coastal town of 15,000 people. The game boat Zulu was waiting for us and a quick 15-minute transfer later, we approached MY Beluga, a 34.9m Moonen built luxury expedition vessel, that would lead us on an adventure of a lifetime.

We were greeted by the crew with cool face towels scented with essential oils and a silver tray of cool fresh coconuts. After a tour of the boat, the distinct smell of freshly baked bread filled the air and called us in the direction of lunch. We sat down for an amazing 3-course meal at a magnificently set table as the boat headed towards our first destination of the Conflict Islands.

Although we arrived amidst grey skies and rain, as we set sail the clouds began to drift away on an adventure of their own, which allowed us to catch the first glimpse of the breathtaking landscape. In the evening, as we enjoyed some sunset drinks, Captain Peter joined us to talk about the itinerary for the trip, and what kind of adventures to expect. After an exquisite dinner, we retired to our luxurious cabins to get some much-needed sleep for the big day ahead. 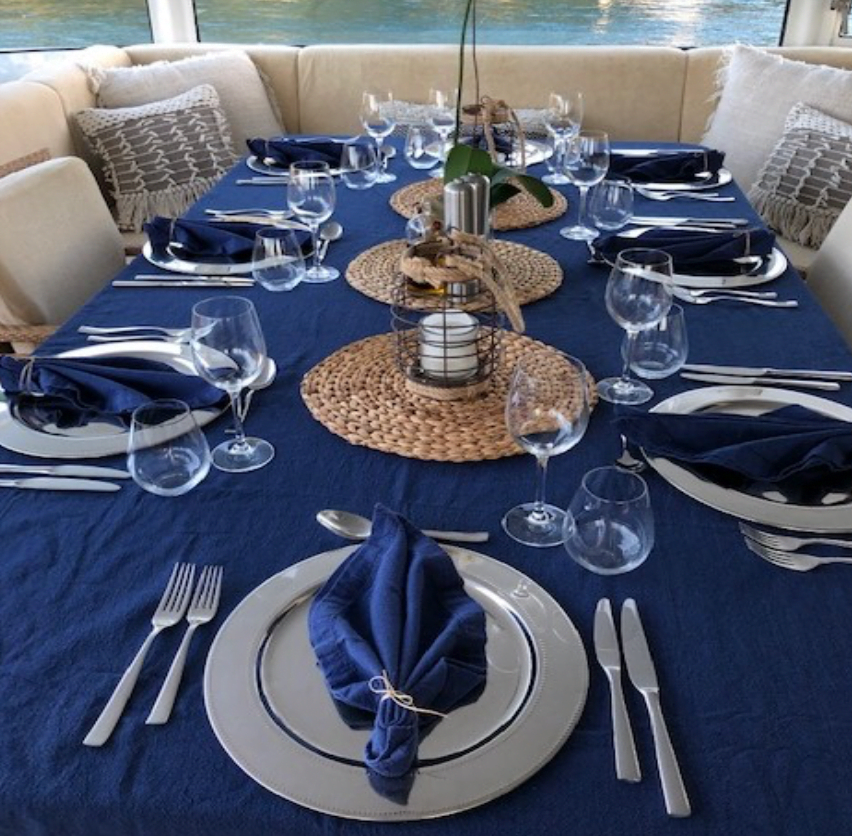 After a calm overnight passage, we awoke to find ourselves anchored in the middle of a ring of submerged volcanoes known as the Conflict Islands.  We began the day by watching the sunrise with freshly made coffee in our hands. The rain from the previous day had disappeared and we were greeted with the tranquil views of the lush green jungle which ran right to the edge of the volcanic rock.  We realised that the scents spilling out of Chef Danielle’s kitchen would be something we anticipated each day excitedly. This morning, alongside a delicious breakfast of everything you could dream of, she also served up the most heavenly tasting scones, infused with fresh dates and organic whipped butter. 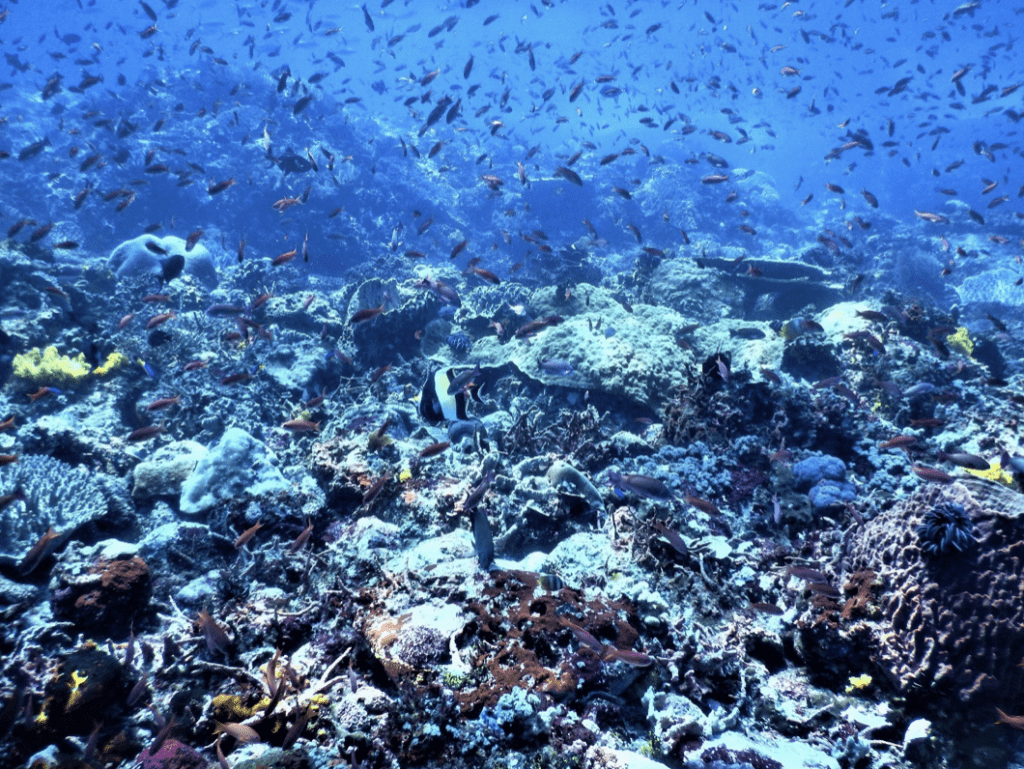 After breakfast, we set out for our first snorkelling adventure of the trip. We spent a good three hours exploring the reef here. It is almost impossible to describe what we found below the surface, it was so beautiful. The colours of the coral were lit in such a way through the lens of the ocean water that it glowed in the most vibrant alluring ways. Fish of all sizes and patterns and colours darted through the uniquely shaped corals, and swaying anemones enticed us in for a closer look as tiny, fluorescent orange male clownfish greeted our intrigued faces with the fearless courage of a protective father warning us that we are getting too close to his family.  Thousands of small electric blue fish shot past our snorkelling masks, large rainbow parrotfish swam gracefully along the seafloor, gaping mouths opening and closing, spitting out sand as they continued about their business, seemingly unphased by our presence in their beautiful marine sanctuary.

Jake and Ryan from Crew Beluga gave us some freediving tips and soon we were lucky enough to find a few painted crayfish for our lunch the next day. As we headed back to MY Beluga, we were met with cool towels and what would soon become our daily ritual of “cocktail of the day” prepared by Chief Stewardess Megan. 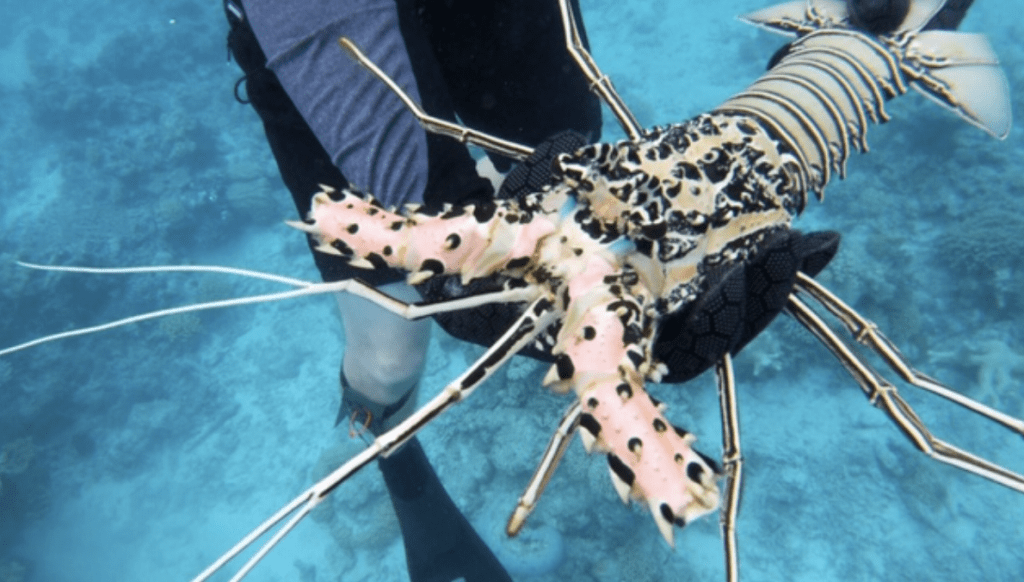 We sat down for lunch, surrounded by palm trees set amongst the tips of the lush green jungle situated on the volcanic islands, completely uninhabited. The islands were only visited by local fishermen in their handmade canoes, travelling through the waters, using the currents, the rocks, the stars and the sun as their map to find and gather fresh fish for their families. It was truly a memorable moment to reflect on the wonders of nature and how magical it can be when left untouched, the way it was intended.

That afternoon we decided to try our luck at game fishing. Zulu is a custom-built game fishing boat, perfectly set up for the task. We set out with the highly experienced and friendly crew of Zulu who first decked us out head to toe in the top of the line game fishing gear. We had not been game fishing before, so after spending 10 minutes taking hilarious selfies of ourselves wearing the gear we were ready to go.

WHAT AN AFTERNOON! Firstly, the crew were fantastic. They were enthusiastic and passionate and showed us all we needed to know. Casting out into the open waters with hooks baited and our gin and tonics topped up, we became enthralled with catching something, and we didn’t have to wait long. 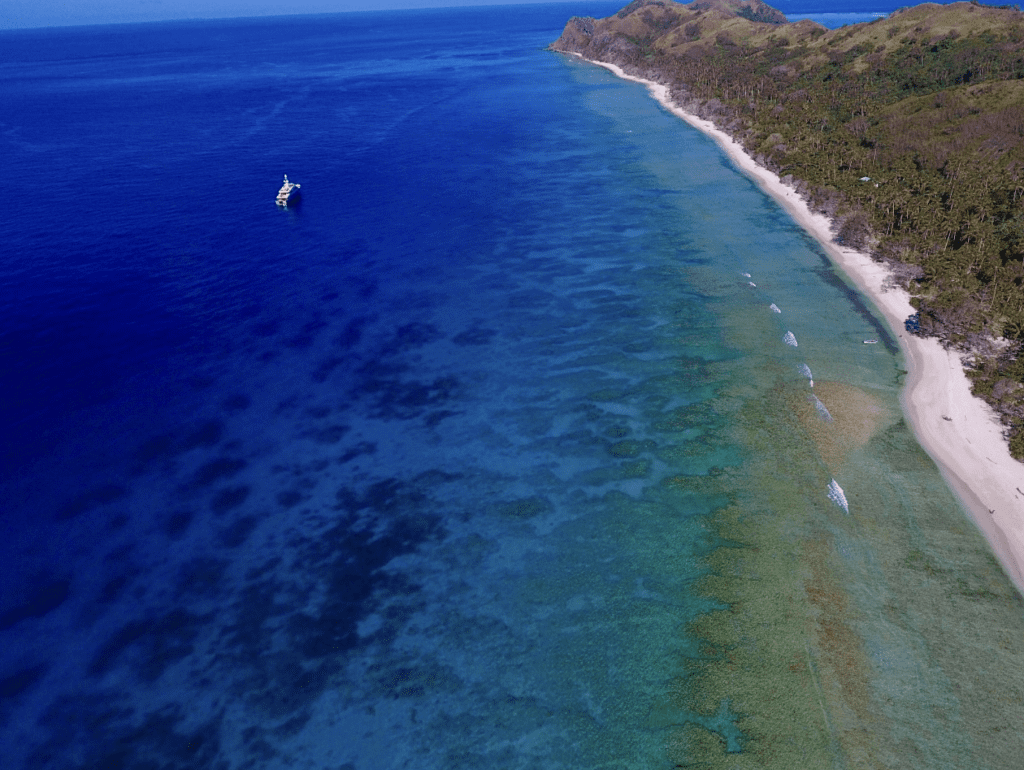 Listening to amazing fishing stories, we took turns in the marlin chair. The waters were peaceful and we almost forgot we were fishing, until the huge rod began to silently bend, and the line dipped into the water and then gave way slightly as someone yelled: “We’re on!” Steve heaved back the rod. He and the fish danced with each other, testing the strength of both their stamina and the hi-tech fishing gear! Exhilarated, Steve reeled back the rod once more. Zulu crew member Jake raced towards the back of the boat with a large net, cradling the amazing creature in the softness of the ropes as it was pulled from the deep blue ocean. A huge Dog Tooth Tuna flapped about on the wooden deck, beaming its sharp teeth and proving itself as magnificent as expected from the performance it gave. After a brief photo opportunity, the colossal fish was thrown back in and off it went.  We spent the next 2 hours pulling in more dogtooth tuna, beautiful red and blue coral trout and a handful of mackerel.

After three hours on board, a delicious fruit platter was prepared by Jake, who is also a trained chef, and numerous glasses of champagne were poured as we arrived back at Beluga, very proud and, pardon the pun, totally hooked!

In the early morning, we arrived in the Conflict Islands. This group of 21 islands is uninhabited, apart from Panacea, which is home to a turtle research centre and hatchery, as well as an eco-resort. Managed by an Australian couple, Hayley Versace and Ed Cardwell, the Conflict Island Conservation Initiative (CICI) aim to protect the pristine coral reef habitat and its endangered species. A call was made to the resort and Hayley advised we could visit the island and take a guided tour. An unexpected addition to our itinerary turned out to be the highlight of the entire trip and a day no one would ever forget. 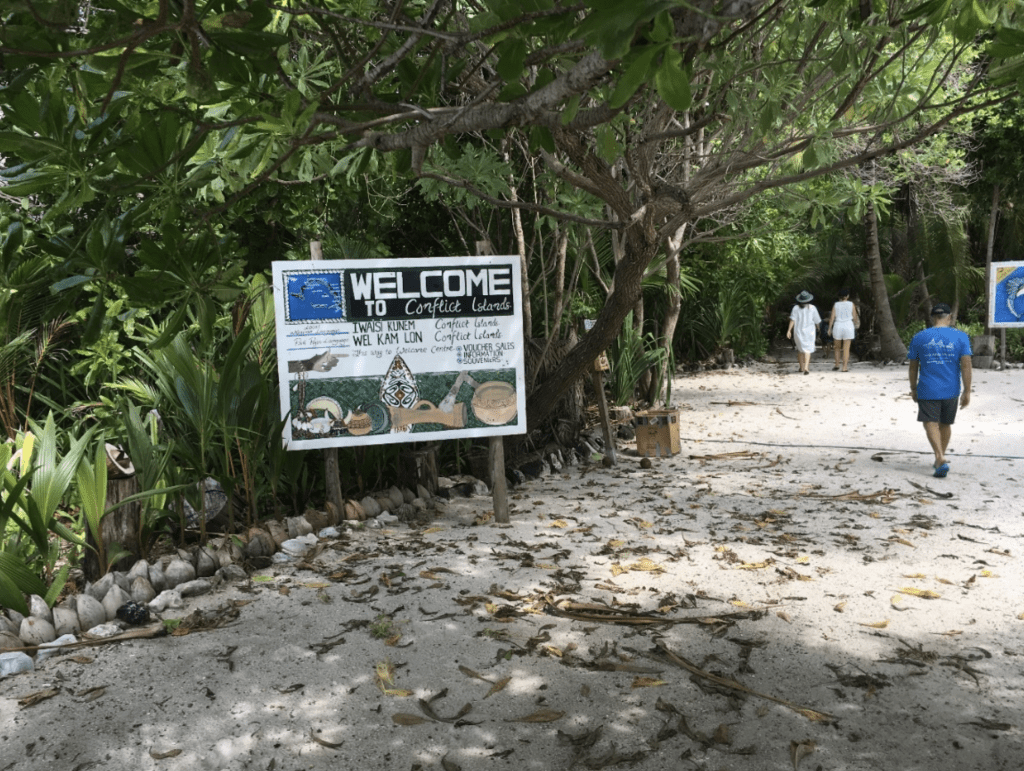 We jumped on to the tender and slowly pulled up to the pristine shores by a long wooden jetty, encrusted with oyster shells and huge schools of fish that looked like blobs of majestic black ink floating with the rhythm of the tide near the jetty pillars.

We were met by Hayley, who is a marine biologist, and the island’s two friendly resident dogs. Walking on sandy paths through groves of swaying palm trees, we felt we had arrived in paradise.

Hayley showed us where she and her team of 20 locals grow their fruit and vegetables, snake beans, pumpkins, bananas, and a huge variety of other foods. 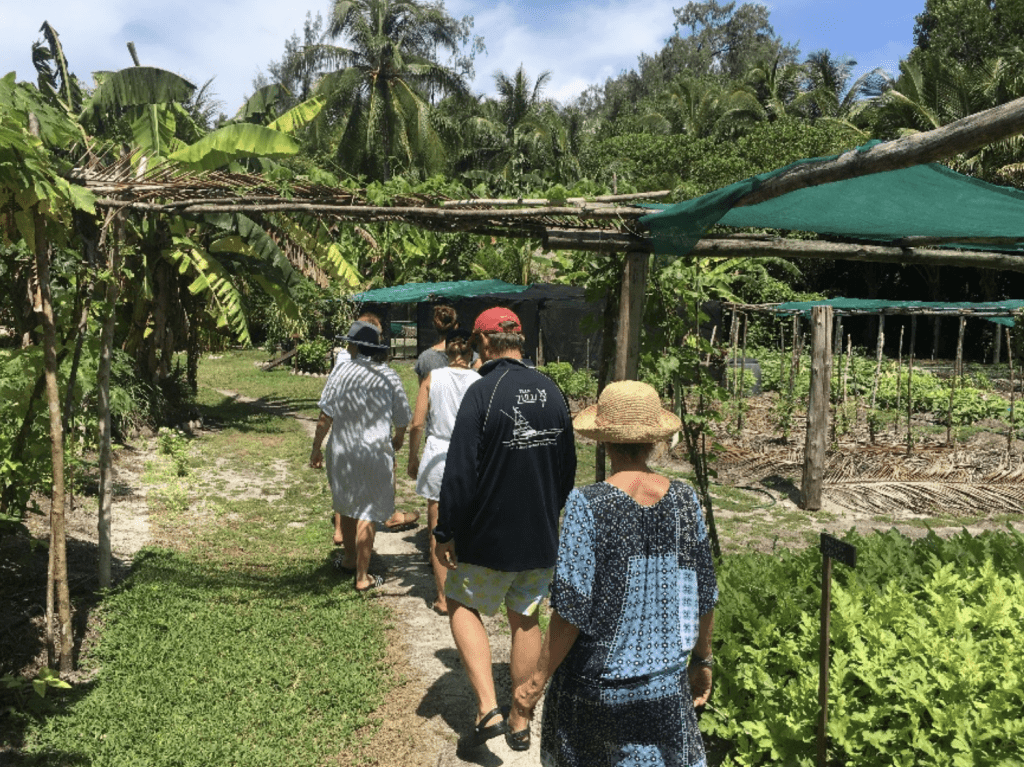 Soon, we arrived at the turtle hatchery, which was a substantial building, built from bamboo. In this enormous space, we found ourselves surrounded by large pools filled with baby hawksbill and green turtles. The turtle sanctuary employs locals, offers volunteer and internship programs and runs research and educational initiatives. The team monitor the turtle nests and relocate eggs to safe areas to protect them from predators. As the first 72 hours are the most dangerous in a baby turtle’s journey in life, the hatchery aims to reduce the risks for them. By the time they are released, they are bigger and stronger and have a far better chance of survival.

Hayley and her team also educate the locals about conservation, and encourage them not to eat the turtle eggs, or use their shells to sell at markets and to tourists. After feeding some of the baby turtles, we were thrilled to have learnt so much about them and seen something so special, but that special feeling wouldn’t end just yet. We had a surprise awaiting us!

As we walked along the white palm-fringed sand, Hayley casually asked if we would like to release about 80 of the baby turtles back into the ocean. We could not think of enough ways to say yes. We couldn’t believe we would be part of such an important event.

Soon we found ourselves back onboard Zulu with two large Tupperware containers brimming with 80 adorable baby turtles. We were able to hold them and gently trace our fingers across the unique patterns that nature printed on to each turtle’s shell. 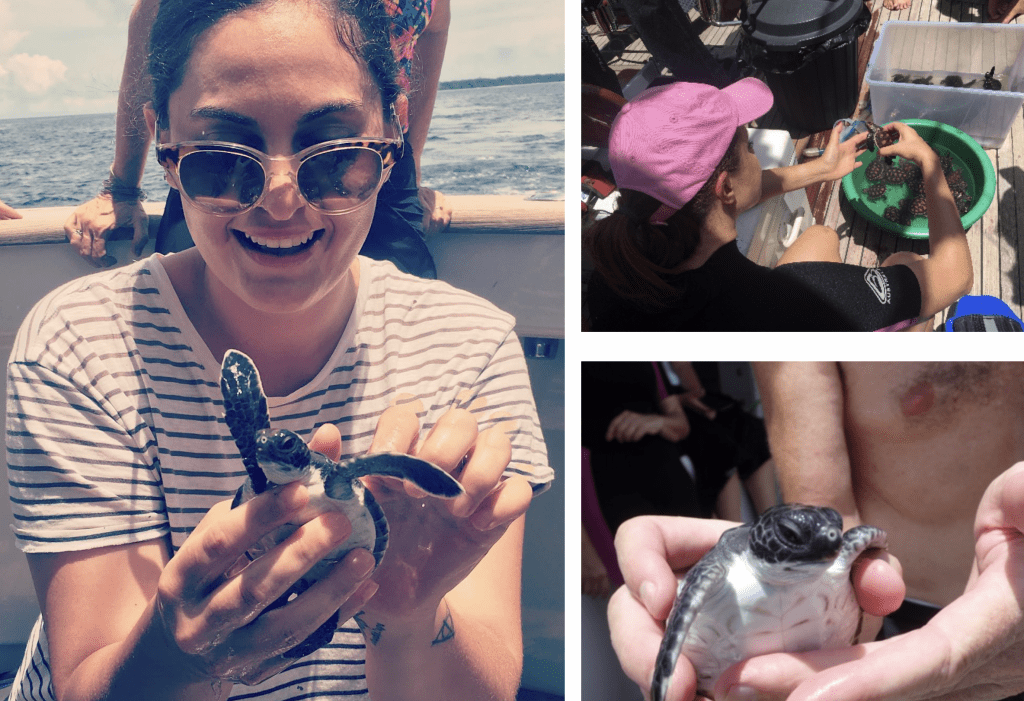 Read part 2 of the blog HERE