There is a new trend in yachting about which the team at Ocean Alliance is excited.  Increasingly, Owners and charterers are looking to combine their yachting adventures with some serious scientific learning and research, turning their experience into once-in-a-lifetime expeditions.  For those who are eternally curious or perhaps are resisting growing up, utilising a superyacht as a floating science laboratory can be serious fun and a great contribution to the world.

For existing superyacht and Owners, many are creating relationships with universities and research authorities to collect information on various characteristics of the world’s oceans.  As superyachts become more intrepid cruising into more remote and isolated destinations, they are the perfect partners for land-bound research groups wanting fresh data.

M/Y ARCHIMEDES is leading this space working with SeaKeepers Society and the University of Florida on Global FINPrint.  This program is the world’s largest survey of shark and manta ray populations and is the brainchild of the late Paul G Allen; philanthropist, Co-founder of Microsoft and prolific yacht Owner.  The crew of ARCHIMEDES was instrumental in collecting information on the shark and manta ray populations in the Caribbean. 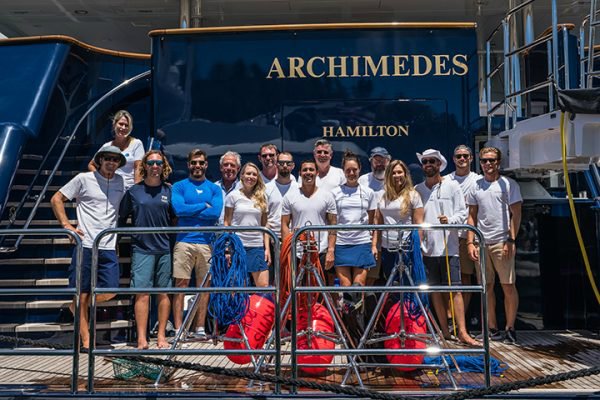 It is a global trend which is also prevalent in Australia.  Most recently, M/Y BELUGA donated crew time and use of the yacht to the documentarians and researchers behind the film, BLUE, which is about ocean conservations and plastic pollution.   A little later, the same yacht took the members of Australia and New Zealand’s Explorers Club on an epic journey down the Queensland coast for not only leisure yet to also collect plastic waste on the remote islands.

As this trend continues to grow, there are more and more yachts being built specifically for this purpose as well as to minimise their impact on the earth.  New builds include hybrid or full electric propulsions aiming for zero emissions as S/Y BLACK PEARL has achieved.  Perhaps the most exciting project in this sphere is the yacht, REV, currently under construction and due to be launched in 2020.

Norweigan billionaire, Kjell Inge Røkke, commissioned renowned yacht designer and countryman, Espen Øino, to design the 182-metre yacht for not only luxurious cruising yet also for scientific research.  This yacht has some serious environmental research credentials and will be used by the World Wildlife Fund for their scientific data gathering.

Espen Øino is also collaborating with Australian yacht builder, SilverYachts, on the 85-metre SILVER LOFT which aims to be one of the most fuel-efficient superyachts on the seas.  Like REV, this yacht is under construction and both yachts will be available for charter. However, if you can’t wait then M/Y BELUGA is currently available for scientific adventure charters with Ocean Alliance.

It is not all about the future of the seas.  Some of the discovery and scientific partnerships centre on the history of our oceans.  M/Y SILENTWORLD has formed the Silentworld Foundation whose ongoing partnership with the Australian Maritime Museum has led to a number of shipwrecks being uncovered on the Queensland coast.  SILENTWORLD regularly prepares for months to complete voyagers with leading marine archaeologists onboard whose discoveries then become part of the collective history and knowledge of all Australians through the museum.  One such voyage won the yacht the inaugural Superyacht Australia ‘Voyager Award’.

If adventures into the past interest you, contact Ocean Alliance to charter the award-winning SILENTWORLD.

Based in Sydney, Ocean Alliance specialises in superyacht charter, management and brokerage with extensive experience in both the Australian and international markets.

A company striving to deliver the industry’s best practice, professional service and exceptional standards whilst based in an emerging superyacht destination.